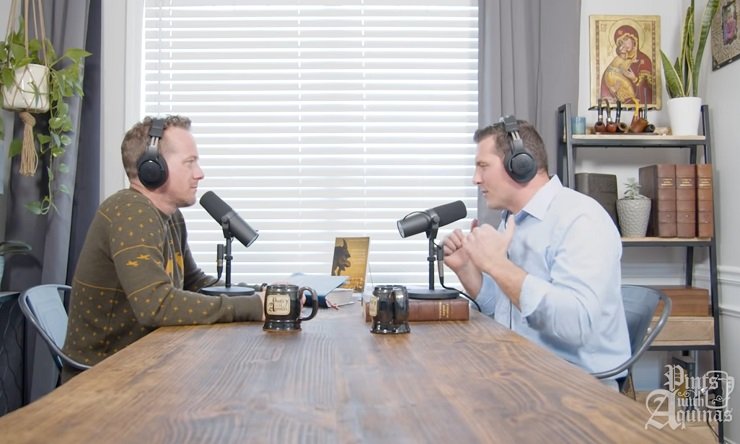 Andrew Swafford was from Dayton, Ohio, and had grown up Catholic, but it had become “in name only,” he said. His choice to play football at Benedictine College in Atchison, Kansas, transformed his life. Today, he is is Associate Professor of Theology at Benedictine College, general editor and contributor to The Great Adventure Catholic Bible published by Ascension Press and host of the DVD series (and author of the companion book) “Romans: The Gospel of Salvation,” also by Ascension. He is the author of three additional books and holds a doctorate in Sacred Theology from the University of St. Mary of the Lake in Mundelein, Ill.

He is married to speaker and author Sarah Swafford and they live with their five children in Atchison, Kansas. The following is taken from a recent episode of Matt Fradd’s Pints With Aquinas, where he also discussed his work with the Great Adventure Catholic Bible and DVD series on Romans. It is lightly edited for clarity.

I grew up Catholic, but it had become kind of in name only. It didn’t necessarily mean a whole lot. I went to play small-college football and had a big conversion at Benedictine College which is where I teach now. I never dreamed I would be where I am now.

Dr. Edward Sri taught there for nine years, and changed my life, so I wanted to do for others what he did for me. I had never heard a man proclaim the Gospel with conviction and confidence like he did. I learned more in a semester with him than in 10 years of Catholic education. That kind of confident conviction and proclamation of the Gospel was powerful.

Benedictine College has reclaimed its Catholic identity in powerful ways, and the enrollment has now doubled its size compared to the school we went to. That was a long time ago but it wasn’t that long ago.

I did well at football. I made the travel team my freshman year, and the playoff squad my freshman year. You think you have everything you want, but you know something is missing. When your happiness and joy is dictated by your time, your weights, your playing time, etc., there’s something off.

We went to play an exhibition game in Paris, France, my freshman year. I broke my fibula in the game over there. For me my world was just crushed. At the time, I really didn’t want to go Paris in the first place—I just wanted to get home to train for the upcoming season. I went into a depression. My world, my identity was kind of gone. I ended up red-shirting that next season, because I didn’t want to waste a year of eligibility not having trained all summer.

I got to go to lunch with Dr. Sri and I was firing questions at him left and right. He said, “I’m teaching this class called Christian moral life. It’s full but it sounds from your questions that it would be right up your alley. If you’d like, I’ll let you in.”

That class changed my life. You walk in and you think it’s about “the Bible says this,” “you can’t do this,” “the Church says that.” But it wasn’t. It was about freedom, virtue, happiness and friendship. I saw intellectually: This is why you’re not happy — you were made for more. Then I got involved in a FOCUS Bible study. Dr. Sri had helped start FOCUS, and it started at Benedictine College.

I remember saying almost out loud, “No matter what you say, I’m not going to do it.”

I knew inexorably that this was the last thing holding me back and two months later, for her sake and for mine, I walked away and it was like gas on a fire after that. You couldn’t shut me up. Then Sarah transferred in the following fall. It was really powerful. It felt like the Lord prepared me to meet her, and she didn’t have to worry if my conversion was about her. And the rest was history.

Where Benedictine was at the time, it caused a wedge —you had kind of the God squad Bible beaters, and you had the jocks and the party crowd, and no one really darkened each others doorways. It was a tension. But we were able to build some bridges. We had a football nondenominational Bible study for a while. We had a lot of evangelical efforts to bring people out of the party crowd.

The interview continues with Dr. Swafford discussing his studies under then Father Robert Barron and giving practical tips on understanding the Bible. Watch the whole interview here.