She belongs to the order of the Franciscan Sisters of St. George Martyr. Founded in 1869 in Germany, the congregation has 1,600 sisters throughout the world. Mother Bexten will lead the order’s community in Alton, Ill.

“I certainly wasn’t expecting it,” Mother Mediatrix (center, above) told The Catholic Missourian of her new role. “But I figured that since this is a double discernment on the part of the sisters here and the sisters on the council in Germany, it must be something God is calling me to. And so far, he has provided me the grace to do the task entrusted to me.”

Mother Mediatrix found her vocation at Benedictine College in Atchison, Kansas, where she studied music education and graduated in 1997. The college’s mission of community, faith and scholarship made all the difference, she said.

“Benedictine was a great place of formation for me,” Mother Mediatrix told the paper. “In a lot of ways, I learned the content of our faith. I was in a better position to encounter Jesus willfully and to desire that undivided relationship with him.”

It began when her roommate started looking into religious life during college and entered the Franciscan Sisters of St. George Martyr in 1997.

“That kind of made me start thinking about possibly entering religious life as well,” Mother Mediatrix told the paper. “I remember being all excited about it and asking all sorts of questions.”

The Rosary helped her find answers. “That is where I felt like I had first met Jesus in a real way, in a relational way,” she said.

Then, a visit to her roommate’s new home clinched it. “I found a sense of being at peace and being at home — a sense that this is where I’m supposed to be,” she said. She soon joined herself.

The seeds of her vocation had been planted in her tight community in her Missouri home. Osage County has “a really great family network,” she told the diocesan newspaper. “There were some things that were just understood — and our faith was one of them.”

She pointed to her grandparents in particular who modeled holiness. “To be surrounded by saints in this life is something I probably took for granted back then, but I certainly don’t take it for granted now,” she said. 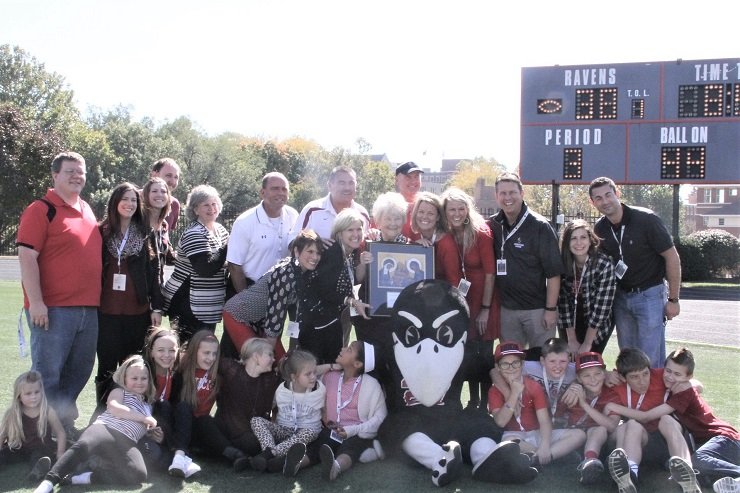 The college has honored her family, especially Rosie and Jim Schaefer, her aunt and uncle.  Rosie and Jim sent four of their five children to Benedictine, and their 2015 Benedictine “Family of the Year” award mentions the Schaefers’ nieces, Kristen Bexten ’93, and Sister Mary Mediatrix.

Jim and Rosie were known as the “Raven Host Family” in their hometown of Jefferson City, Mo. They would invite entire Raven football teams over to their home for dinner when the team was playing on the road at nearby Lincoln University. The couple would also hold recruitment parties for potential students and their families and to this day hosts summer send-off picnics for the families of new students from their area who would be attending Benedictine College in the fall.

Though they never attended Benedictine College, Jim and Rosie’s support was so strong they received the first Benedictine College Honorary Alumni Award in 1992. The children have all continued that support. Mother Mediatrix’s cousin Pam has served on the Benedictine College Board of Directors and was honored with the 2009 Offeramus Medal. Each of her Schaefer cousins has supported the college in some way and together created a scholarship in their parents’ name.

Now, Mother Mediatrix finds herself at the helm of an organization known for their nursing, serving in hospitals, daycare centers and nursing homes; teaching children and adults of all ages; care for retired priests; and service in bishops’ households such as the Vatican Nunciature in Washington, D.C.

“My leadership prep has been very organic,” she told the paper. “I don’t have an MBA or anything like that. But I think being a teacher is great formation for how to be a leader.”

While promising to continue praying for those who formed her before entering religious life, Mother Mediatrix asked for prayers “for an outpouring of the Holy Spirit on me and my council and also on the congregation.”