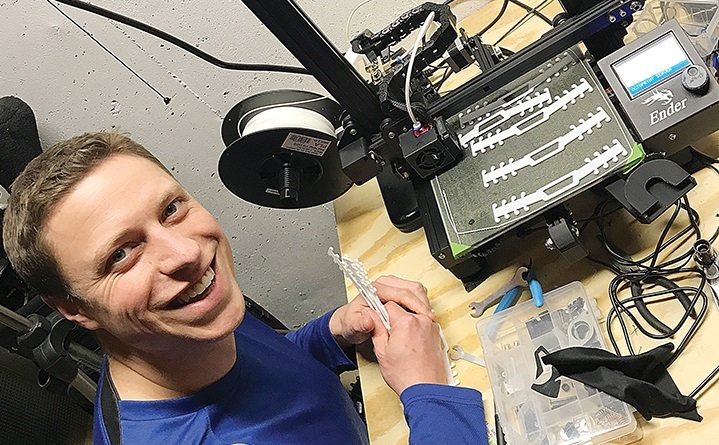 The Benedictine mission of community, faith and scholarship transformed culture in Europe at the dawn of Western Civilization and Benedictine College in Atchison, Kansas, believes it can do the same in America today. Benedictine is Forming its students deeply in that mission, Advancing the mission through alumni in every walk of life, and Extending the mission regionally and nationally.

Ryan Johnson calls the work of so many during the coronavirus “A more modern version of ‘Rosie the Riveter’ as we battle this virus.” The difference: World War II domestic women workers used riveting machines. Johnson and his friend Jake Schmitz use a 3D printer.

They are helping medical professionals in the coronavirus crisis by creating “ear savers” to allow them to wear masks for long periods of time.

The two met at Benedictine College in Atchison, Kansas, where they graduated in 2012, and work for Overland Park, Kansas-based Catholic Faith Technologies. Johnson and Schmitz have manufactured and distributed 1,500 plastic pieces that allow medical professionals to wear masks without chafing or bruising their ears.

In March Johnson posted on Facebook, “I’ve been struggling to find the right perspective the last few days so woke up this morning and tried to find it.”

He found his answer in the Bible, where he read: “So faith, hope, love remain, these three, but the greatest of these is love” (1 Corinthians 13:13).

The project begant on Palm Sunday after Mass. Kids at Holy Cross School at his parish in Overland Park, Kansas, were already making ear savers for doctors and nurses. Johnson asked friends in the medical field if making more ear savers was a good idea.

They said it was, so he reached out to Schmitz.

“I didn’t have a 3D printer, but I knew that Jake did,” Johnson told The Leaven newspaper. “So, I texted him. I sent him the plans and said, ‘Hey, this would be really cool to do together.’”

Schmitz described the process. “The way the printer does that is with a big spool of plastic filament, like a really, really big fishing line,” he told The Leaven. “You hook the spool to a printer, and it feeds the wire into the printer, heats it up, and will [build] the object layer by layer … from a heated nozzle.”

Because 3D printers are expensive, Johnson’s parents donated money to help him expand the project. 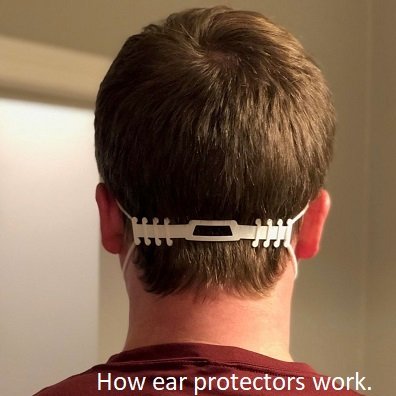 The Raven friends began distributing their ear savers by making contacts over social media. In addition to serving a lab in Hiawatha, Kansas, the two are now producing ear savers for a hospital in Dallas, several Iowa facilities; an emergency room in St. Louis; a children’s hospital in Tucson, Ariz., and more in Denver and San Antonio, Texas.

“I’ve got a whole empty wall we can line printers up on,” Schmitz told The Leaven. “But the point isn’t for us to do it all,” he said. Anyone with a 3D printer can help. “We can handle distribution,” said Schmitz.

At Benedictine College, Johnson was a member of the college ministry team and lived two years in a St. Paul’s Outreach household.

“I had some incredible professors, examples that I feel by their own lives showed me what it looked like to make a difference in their own way and how to give God glory,” he said.

He said the Benedictine mission of the school — community, faith, and scholarship — was a key to the work. Quoting St. Benedict’s Rule, he said that true hospitality meant treating everyone like Christ.

He called Benedictine “a place of great hospitality that encourages great participation in the life of the community,” he said. “I have tried to carry that spirit with me and find ways in my own community now to respond with hospitality to God’s generosity in my own life.”

Schmitz served the local community extensively while at Benedictine, helping out the Boys and Girls club in Atchison, tutoring at Maur Hill Mount Academy, mentoring Benedictine College student athletes, aiding at-risk and special needs students in the Atchison school system, and delivering meals to the homeless.

He said that “The Benedictine way of work, prayer and hospitality” has been great for life in general, but “most especially during these harder times of stay-at-home orders, social distancing, quarantine, and uncertainty.”

Read more at The Leaven.