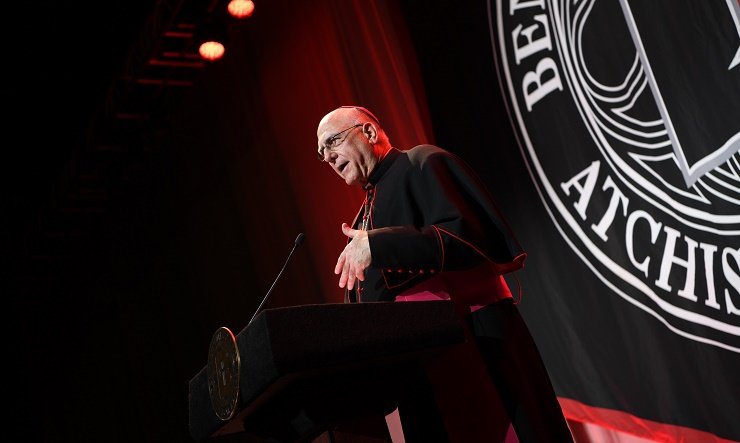 Archbishop Joseph Naumann joked about George Weigel and Kansas City Chiefs quarterback Patrick Mahomes on Feb. 29, but his theme was simple: “It’s always good to be a Raven.”

The Kansas City-Kansas, Archbishop Naumann spoke at the 49th annual Scholarship Ball for Benedictine College in Atchison, Kansas. Naumann, the director of the U.S. bishops’ pro-life committee, was honored by Benedictine College with its prestigious the Cross of the Order of St. Benedict award.

Archbishop Naumann began his remarks by saying that when he first became the Archbishop in Northeast Kansas he had to learn which parts of his Archdiocese were home to Kansas University fans and which had more Kansas State fans.

The archbishop became a Raven in 2012 when he received an honorary doctorate sharing the stage with George Weigel, papal biographer and Catholic intellectual.

“I was grateful for the degree and also that from that day forward I could honestly say I was a classmate of George Weigel,” Archbishop Naumann joked. “He was Number 1 in the class. I was Number 2.”

The Cross of the Order of St. Benedict is the highest honor the college bestows. Past recipients include Nobel Peace Prize recipient Wangari Maathai, Rwandan author Immaculee Ilibagiza, and the editor of the Catechism of the Catholic Church, Cardinal Christoph Schönborn.

“Benedictine College loves Archbishop Naumann and Archbishop Naumann loves Benedictine College,” he said. “He visits the campus often. He celebrates our Baccalaureate Mass; All Saints Day Mass; and the Divine Mercy Sunday Mass in which he  accepts into the Church an average of 10 students every year. He also engages in yearly fireside chats with senior philosophy and theology majors on a topic of the day.”

Minnis called Nauman “a steady guide and a strong positive influence on the college and its students.”

“In an era when sadly many Catholic colleges have closed and others have lost their Catholic character, Benedictine College stands out for its unabashedly Catholic culture and spiritual life, high academic standards, beautiful campus and a warm and vibrant experience of student life,” he said.

“Benedictine is truly a place where faith and reason are partners in pursuing the truth,” he said, calling the college “a shining example of what is possible when a Catholic higher education institution embraces the vision articulated by the late pope St. John Paul II and Ex Corde Ecclesiae.”

He said the college “excels at preparing students not simply for successful careers but helps them discover their vocation, how God is calling them to use the unique set of gifts that he has entrusted to them.”

In the year 2020, Benedictine College completes its plan Benedictine 2020: A Vision for Greatness whose goal was to fulfill the college’s vision to build one of America’s great Catholic colleges. As a follow up, Benedictine College has embarked on a new plan, Transforming Culture in America. The college collected leading experts from all walks of life to discuss ways the college can make a real impact on the future.

In a nod to the college’s new Center for Art and Culture, he said: “In a culture profoundly influenced by a nihilism that results in art that reflects darkness and despair Benedictine College exposes its students to what is most beautiful in literature music art and drama.”

In reference to the college’s emphasis on virtuous leadership, he said: “In a society that confuses success with greed, Benedictine College inculcates in its students an ethic of service.”

He added: “In a culture that confuses love with lust, the use of another for pleasure, Benedictine College forms students with a vision of love that is always seeking the good of the other before ones own wants and desires.”

The college has been consulting with the Archdiocese about how to help renew family life in America. “Benedictine seeks to help its students develop those virtues that will make them great husbands and wives forming marriages that will be the foundation for healthy vibrant families, communities, and the Church,” said the Archbishop.

He summed up, “With your generosity tonight hopefully there will be more Ravens available to transform the world equipped with the truth, beauty, goodness of an authentic Catholic education.”

As the college honored the Archbishop of Kansas City Kansas in the wake of the Super Bowl, the victory by the Kansas City Chiefs was very much on people’s minds.

“Bishop Johnson pulled off the public relations gem of presenting Pope Francis with a Patrick Mahomes jersey,” said Archbishop Naumann, referring to the superstar quarterbacks of the Chiefs. The Archbishop said someone asked him what the Pope would do with the jersey. He said, “I wouldn’t be surprised to go back to Rome and see some homeless person wearing a Mahomes signed jersey.”