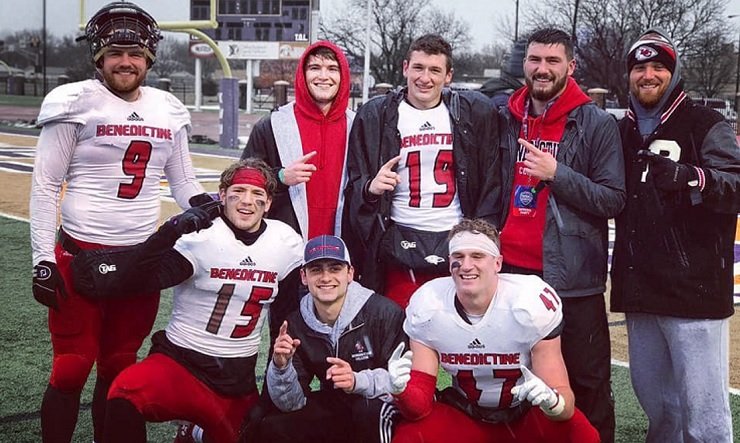 Why would two football players want to become Catholic?

The Rosary, of course! 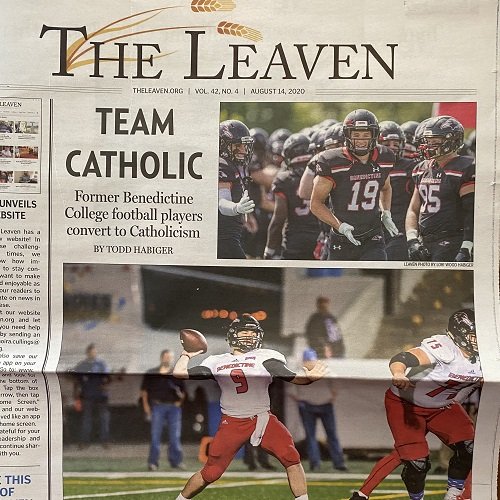 That’s what The Leaven newspaper in the Archdiocese of Kansas City, Kansas, reported this weekend. Shaefer Schuetz,(No. 9 above)  and Logan Harris (No. 19), the quarterback and wide receiver for the Raven Football team that played in the national championship in 2018 before finishing up their studies at Benedictine College in a unique undergraduate-plus-MBA program in business.

The two were welcomed into the Church by Abbot James Albers on July 26 with two other students.

Neither football player had experienced the Catholic Church much at all before coming to Benedictine College.

Harris said that the campus faith life was welcoming but not pushy. “The biggest thing for me was that it was never overbearing,” he told The Leaven. “There was never a push for me to become Catholic. They weren’t forcing people to go to Mass or anything, but the option was always there.”

Quarterback Schuetz admits that the Catholicism on campus was foreign to him at first. “I remember coming in during fall camp and it’s 105 degrees and there are these guys walking around in black robes,” he said. “I was petrified of all of them because I had never seen a monk before.”

Seeing them over and over again made the fear melt away.

“What’s cool is that those guys are so present. They go to games. They go to different school functions. They are super-involved. I got to know those guys and realized that they are normal human beings and good dudes,” he said.

Reported Todd Habiger for The Leaven: “After a couple years on campus and soaking up the Benedictine experience, Schuetz and Harris received an invitation from athletic director and assistant football coach Charles Gartenmayer to attend the rosary that Benedictine president Steve Minnis offers every Wednesday morning.”

Gartenmayer invited them because “I saw a little bit of light in each of them,” he told The Leaven. “They had made some strong friendships with people who had a really strong walk with Christ. I think they were wondering, ‘Well what is all of this?’”

He gave them a handout on how to say the rosary. The Rosary became “something we would look forward to every week,” Schuetz said. “It was rosary and then breakfast and it was awesome,” Schuetz said.

Soon, Schuetz and Harris were inviting their friends to the rosary with them.

“I felt like Wednesdays were always my most productive days,” Harris said. “My buddies and I always felt so much better on Wednesdays because we got up and did something like that. It was a great way to start the day.”

The National Catholic Register reported in 2018, the team had so many players at the Wednesday morning Rosary — more than a dozen — that they became known as “Mary’s Team”

The Register also reported that Schuetz also started to go to Eucharistic adoration before each Raven Football game, saying, “What better way can you spend a Friday night than in adoration before the Lord?”

President Stephen Minnis told The Leaven he has leads the Rosary each Wednesday because of what the prayer did for his personal faith.

“When you see these kids get out of bed on Wednesday morning at 7:30 a.m. and they come to the top of the hill and pray a rosary, and when you see them leave, you just think, ‘OK. The world’s a better place because these kids are in it,’” he said. “Most of the kids that were going to the Wednesday morning rosary were Catholic. … But those two were non-Catholic — and they never missed a day.  I was really inspired by them.”

The rosary was the beginning of Schuetz and Harris’s conversion — the Benedictine College mission of community, faith and scholarship did the rest.

Benedictine “did a really good job allowing it to be your decision and cultivating an environment for discussion” Schuetz told the paper. “I was surrounded by people who were Catholic, who were really living out their faith, and it started to become more attractive to me.”

“I always wanted to receive the Eucharist and obviously never did prior to becoming Catholic,” he added. “So, when I was finally able to receive it after going to Mass for years without receiving it, that was pretty awesome and pretty special to me.”