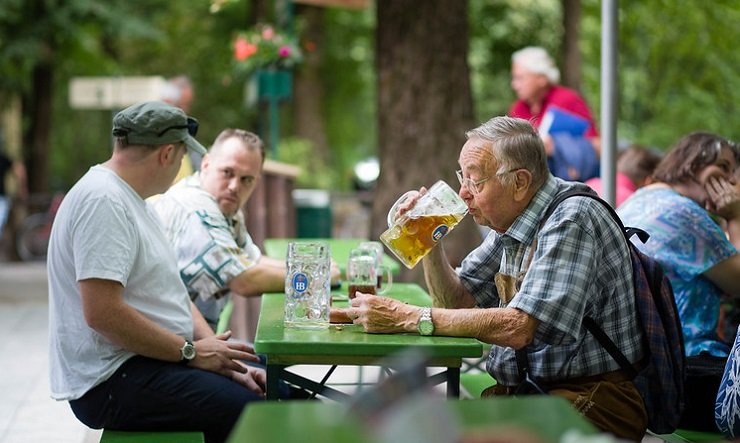 This Friday is International Beer Day, so be ready. In a world that desperately needs community, beer may be more important than ever.

Several years ago, three Benedictine College graduates had a beer together, then started a revolution. They had a great conversation about beauty and community, and decided to do it again. And again. They started the “Catholic Beer Club,” which spread to two dozen cities.

Their goal: build community. No speaker. No agenda. No worries. Just meet and talk and be friends.

Science is increasingly showing just how right they are: We were built for community and our souls shrivel and die without it.

You can see this principle emerging in the hard sciences.

The newly released book Survival of the Friendliest: Understanding Our Origins and Rediscovering Our Common Humanity tells the tale of a generations-long misunderstanding: We got the science of “survival of the fittest” all wrong.

We tend to think that the future belongs to those who dominate and defeat the others. Scientists Brian Hare and Vanessa Woods, both researchers at Duke University’s Center for Cognitive Neuroscience, show that plants, animals, and even human beings endure not by dominating others, but by helping them.

Dogs — wolves that dropped their wolfishness — are “Exhibit A,” said Hare. Exhibit B are bonobos, chimpanzee-like apes who cooperate instead of conquer. “The friendliest male bonobo is more successful than the unfriendliest chimpanzee,” Hare told the Washington Post.

Christians know this principle already: “The meek shall inherit the earth.” Somehow, we forget that.

In a new interview Mary Eberstadt, the author of books examining the intersection of sociology and culture, said human beings are being left truncated and numb from lack of community.

“Many people in the West are gripped by a profound identity crisis,” she said. Hyper-individualized lifestyles have “robbed people of the usual ways of answering the universal question, ‘Who am I?’”

“People no longer identify themselves first and foremost as Christians and other religious believers. Simultaneously, the splitting of the family,” she said, “means that many people can also no longer construct stable identities as mothers, fathers, sisters, brothers, cousins, aunts, or uncles.”

We “find emotional satisfaction in political collectives instead. That’s why identity politics is re-writing elections and laws across the West.”

Given the choice of family and friends or political allies, we’re choosing the latter. That’s the wrong choice. The first kind of connection is based on love. The second is, increasingly, based on hate.

Hate Inc. is the title of a 2019 book by Matt Taibi. The subtitle is Why Today’s Media Makes Us Despise One Another.

If creatures like us survive through cooperation, we are in trouble. A Rolling Stone magazine contributing editor, Taibi traces the way our binary political discourse is making it harder and harder to find common ground. In the media today, he said, the first rule is “There are only two ideas,” which reduces every question into an “us” vs. “them” issue.

Starting with Crossfire decades ago and worsening in the internet age, our news media teach us not to think through issues with an open mind, but to root for one side over another. Partisan media invites us to see the other side in as unflattering light as possible and to feel as superior as possible about our own moral enlightenment. This divides us when what we most need is to be connected.

This is a strange place to be, given that we know more than ever how important community is.

I first heard about neuroscience research from David Brooks, the New York Times columnist who wrote the book The Social Animal to demonstrate how the future belongs to those who can get along.

Brooks summed it up: “Scientists, philosophers and others were developing a more accurate view of human nature, which is that emotion is more important than reason, that we’re not individuals — we’re deeply interconnected.”

So have a beer this Friday. Invite the neighbors.

Start building the communities that will transform your life. The future depends on it.

This appeared at Aleteia.
Image: Flickr N i c o l a.