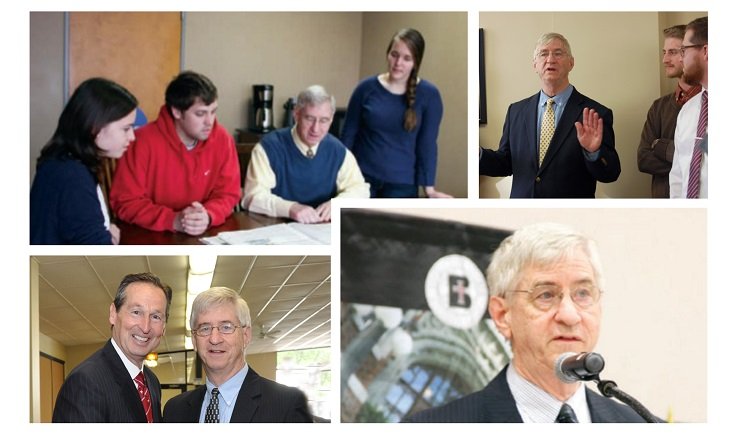 After 20 years, Dr. Francis (Frank) P. Kessler has retired from teaching as a professor in the Political Science Department at Benedictine College in Atchison, Kansas. Prior to that, he taught at Missouri Western State University in St. Joseph, Missouri, for 30 years and retired there as professor emeritus in Political Science. In addition to his role as a college professor, he has been an author, lecturer, guest television and radio political consultant, and on-air host of both TV and radio series. Through it all, it was his students who meant the most to him. His commitment to furthering the mission of Benedictine College prompted the school’s administration to take the extraordinary step of creating an official resolution in his honor (below).

“Dealing with, talking with and advising presidents, Supreme Court justices, White House staffers from FDR to Obama, staff and cabinet and agency folks, national media folks and the like would be seen by some as success in a career,” Kessler said. “But not one of them had more dignity than the wonderful students who are our hope for the nation’s future.”

Kessler received his bachelor’s and master’s degrees in Political Science from Saint Louis University and earned his Ph.D. in International, American and Comparative Government from the University of Notre Dame. He published his first book, “The Dilemmas of Presidential Leadership: Of Caretakers and Kings,” in 1982 and has since been a contributor, author or co-author of more than 300 articles and essays in numerous books, magazines, and periodicals. His attention to the Catholic faith and his care for his students earned him many accolades, including the American Political Science Association Award, Missouri Western’s Distinguished Faculty Award, and Benedictine’s “Do Something Beautiful for God” Award.

“When he received his Ph.D., from a Catholic university, he was told that the religious affiliation would hold him back professionally,” said Benedictine College President Stephen D. Minnis. “As I think we can see, that has definitely NOT been the case and he is always sure to tell his students that if they trust in God and do their best work, they will succeed.”

Minnis said the college was honored to have Kessler’s presence for the last two decades.

“With his success as an author and political analyst, he could have taught anywhere and done anything,” he said. “We are grateful that he was drawn to Benedictine to finish out his career and his presence and faithful influence will be missed.”

Founded in 1858, Benedictine College is a Catholic, Benedictine, residential, liberal arts college located on the bluffs above the Missouri River in Atchison, Kansas. The school is proud to have been named in the Top 10 in the Midwest of America’s Best Colleges by U.S. News & World Report, the best private college in Kansas by The Wall Street Journal, and one of the top Catholic colleges in the nation by First Things magazine and the Newman Guide. It prides itself on outstanding academics, extraordinary faith life, strong athletic programs, and an exceptional sense of community and belonging. It has a mission to educate men and women within a community of faith and scholarship.

Whereas, since 1999 Dr. Francis P. Kessler has served as part of the Benedictine College Faculty; and

Whereas, Dr. Kessler has made important contributions to the profession in his leadership role in significant professional organizations, such as the Center for the Study of the Presidency; and

Whereas, Dr. Kessler’s expertise has contributed to the common good through his knowledgeable commentary in the media and his work on political campaigns at all levels, including presidential campaigns; and

Whereas, Dr. Kessler had a long and distinguished career at Missouri Western University; and,

Whereas, Dr. Kessler forewent the pleasure of retirement to undertake a second career at Benedictine College; and

Whereas, Dr. Kessler was motivated in this second career by his commitment to the mission of the college; and

Whereas, Dr. Kessler has committed himself tirelessly to the promotion of that mission; and

Whereas, Dr. Kessler has supported the Catholic identity of Benedictine College in many ways, including purchasing crucifixes for all classrooms on campus; and

Whereas, Dr. Kessler has been unswervingly committed to demonstrating the relevance of the Catholic faith to contemporary politics and current issues; and

Whereas, Dr. Kessler has built community by working intensely and individually with his students, and

Whereas, Dr. Kessler has combined rigorously high standards with unstinting support, leading his students to achieve great things in many walks of life; and

Whereas, Dr. Kessler and his wife Mary have been extremely generous donors to the college in order to uphold the mission of education within a community of faith and scholarship;

Be it further resolved that the President’s Cabinet takes great pleasure in recognizing the professional accomplishments and dedication to student development and well-being of Dr. Francis P. Kessler.

Be it further resolved that this gratitude extends to Mrs. Mary Kessler, who shares in Dr. Kessler’s commitment to the mission of Benedictine College.

Be it further resolved that this resolution be recorded in the permanent minutes of the President’s Cabinet and that a copy will be sent to Dr. Francis P. Kessler and another copy will be maintained in the office of the Dean of the College