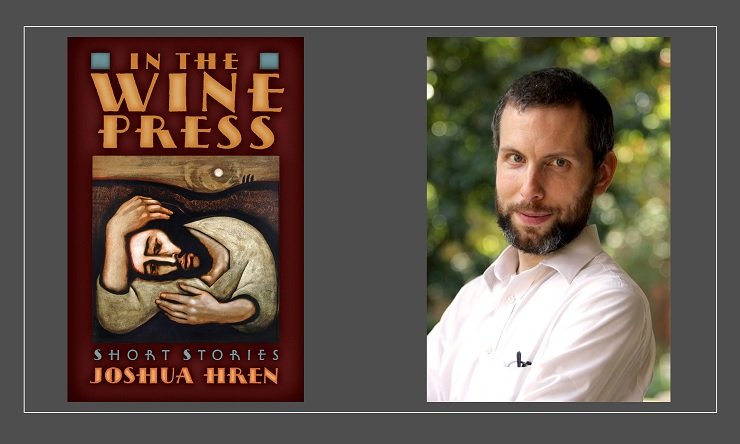 Excerpted from “A Deep Thinking Storyteller on the Rise” in Catholic World Report by Stephen Mirarchi, who teaches about Catholic literature at Benedictine College in Atchison, Kansas.

In the Wine Press: Short Stories by Joshua Hren (Angelico Press, 2020) exhibits the riveting work of a deep-thinking storyteller on the rise, one who understands all too well that while redemptive suffering answers many difficult questions, accepting and enduring it means being crushed to death — hopefully to bear great fruit.

If the new Catholic Literary Revival is to be successful, it may not be merely an “in-house” job catering to Catholics and sympathetic Christians (of any stripe, theological or political). Nor may this renaissance be wholly a literary outreach effort, oblivious to the transcendental needs of the faithful. How is our new fiction and poetry practicing the skills of the aesthetic masters while speaking to the heart of a profoundly suffering generation?

Joshua Hren has been one of the leaders in this movement, from his founding of Wiseblood Books to his teaching at Belmont Abbey, and even unto his fiction itself. His first book of short stories, This Our Exile (2018), exhibited Hren’s keen sense of spiritual investigation, especially in its insistence that we humans often run ourselves ragged into conditions that beg for God’s grace. For Hren’s early characters, God seems less a Francis Thompson “Hound of Heaven” who will tackle you in the end no matter what and more of a Salvador Dalí-inspired savior of a bizarre geometry, a religious calculus that somehow makes the miraculous out of our abject descent into the dirt. Told with dense, elliptical, and thoroughly modernist psychological realism, Hren’s first stories ran along the same lines of literary nascency that, say, Cormac McCarthy’s first novel, The Orchard Keeper, did: the work of an obvious talent attempting to emerge from the crosshatched thickets of faith, reason, and aesthetic decadence.

McCarthy, of course, famously made it on The Road, an ultra-minimalist post-apocalyptic freakshow that owed more to Hemingway’s curt declarations of stoic manhood and Léon Bloy’s spiritually aggressive shock tactics than to the author’s own critically acclaimed works of intricate genius like Suttree and Blood Meridian. That familiar “progression” from dense and aesthetically reckless to accessible and fine-tuned often earns one, fairly or not, the moniker of “sellout.”

But the seemingly reverse sequence — from bare-naked, underdeveloped prose to epic sagas of tortured souls—has also made or broken, depending on your assessment, several a contemporary writer. Raymond Carver so effaced the short and sour suburban dystopias of What We Talk About When We Talk About Love with the heavily revised and redemptive rewrites in Where I’m Calling From that one critic likened the process of producing the latter to a twelve-step program.

The good news is that Hren’s second collection, In the Wine Press, takes the best of both approaches: the stories are less dense for their own sake and more aesthetically refined, just as they lead to even deeper spiritual mysteries while avoiding the allure of quasi-numinous sensationalism. Though Hren’s first book may have dabbled in exploring the nether regions of a Simone Weil-styled “mysticism to schism” regress, this follow-up veers more toward the flatland curiosities revealed by Eudora Welty, a kind of bathetic “ain’t that peculiar” experience in the face of domestic horror. Hren’s characters this time around seem less befuddled in Dostoevskian existentialism or Kierkegaardian resignation and more engaged in self-conscious reactivity akin to Francis Marion Tarwater’s knee-jerk righteousness oddly balanced by the entrancing charity of Oscar Hijeulos’s Mr. Ives’ Christmas.

Similar to his first collection, In the Wine Press continues to unfold the despondent drama of American familial and ecclesial dysfunction with an aesthetically unlikely dovetailing of John Updike’s cul-de-sac tragicomedy and Muriel Spark’s contrarian gallows humor. The debt owed to Walker Percy is less obvious but nonetheless present in an overarching sense of Hren himself as “a doctor who knows things,” perhaps a clever nod to the metafictional devices of the more secular prophet-seeker writers like David Foster Wallace.

Significantly, Hren’s most successful story to date — “Tears in Things,” in which a parish secretary pulls an Elijah move against a Baal-ful bishop — draws heavily on the American literary tradition embodied in Katherine Anne Porter, especially in her “Flowering Judas.” Porter, who corresponded with Flannery O’Connor and many of those mid-twentieth century authors deeply invested in at least the cultural impact of Catholic teaching, adeptly drew ruminating or brooding characters tottering at the borders of human and spiritual revolutions. Hren attempts and usually succeeds at the same, especially in the intertwining of events among his stories that evokes the community narrator concept so adroitly accomplished by Faulkner.