And the winner is … the culture!

Dr. Denis McNamara, Director of the Center for Beauty and Culture at Benedictine College in Atchison, Kansas, awarded top prizes in the Catholic Art Institute’s sacred art competition, awarding $2,000 in prizes. To see a YouTube video podcast of his description of the winners, scroll to bottom of this post or click here.

The ultimate winner is culture, which is enriched and deepened by beauty. 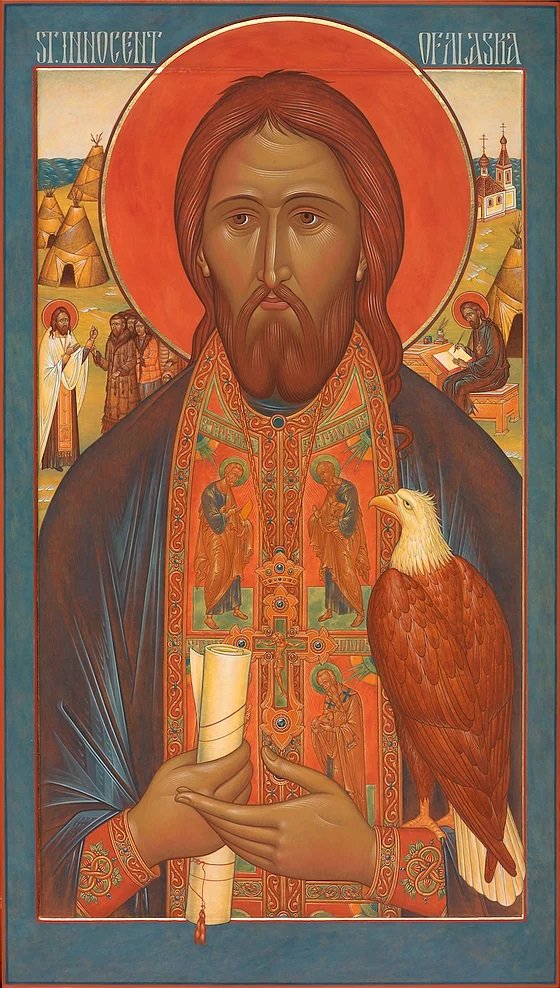 The First Prize winner, “St. Innocent of Alaska” by Father Silouan Justiniano,” was chosen was chosen for its evidence of mastery of the art of iconography and its fulfilment of the selection criteria: a saint is chosen who is at once human and divinized, with a face revealing the human passions transformed by grace.” The piece, egg termpera and gold on gessoed panel, is 18 by 32 inches.

McNamara noted that the saint’s “expression shows the pathos proper to a missionary subject to hardship, yet also a subdued intellectual vitality of one contemplating the face of God suitable to his role as first resident Orthodox bishop of Alaska.”

He added that “The complexity of the secondary and tertiary images are masterfully composed and read in proper visual hierarchy: the elaboration of the vestments, which contain, in effect, four smaller icons within; the depictions of historical scenes in the Alaskan landscape which speak of his role as evangelizer and translator of the scriptures into local languages; the scroll signifying his authority as a scholar and bishop which adds vitality by extending outside the frame of the image itself.” 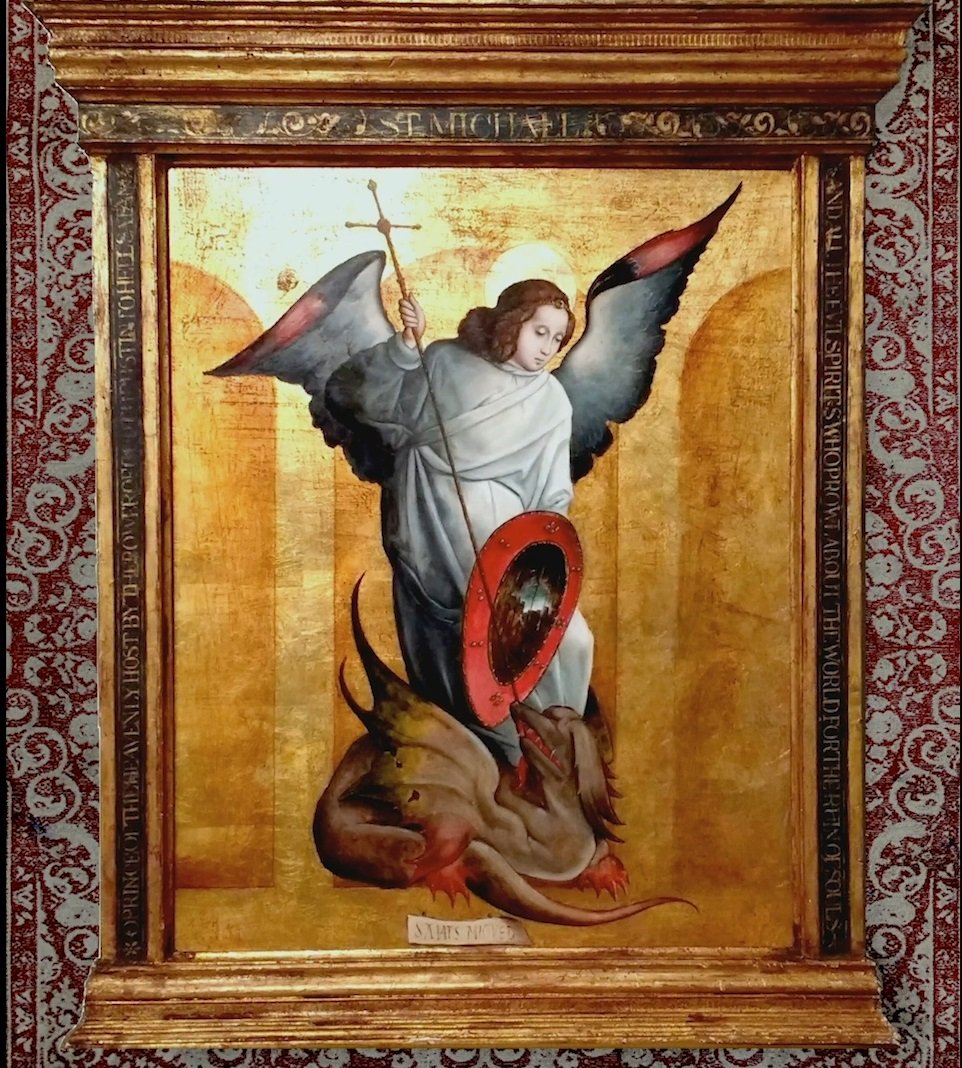 Second Prize went to “St. Michael” by David Troncoso. The oil on panel and gilded pine was chosen “for its character of being recognizably Western yet bringing forth the sacramental qualities expressed in the competition selection criteria,” said McNamara. He added:

“Masterfully executed on board, it shows a moment of dramatic activity in slaying Satan, yet the image captures an effortless stillness that makes it outside of earthly time. The golden background with its implied arcade indicates a place yet preserves its placelessness. As a whole it harkens back to late medieval or Northern Renaissance inspiration, yet reads as clearly fresh and suitable as prompting for prayer today. In addition, the artist designed and fabricated the frame, which harmonizes with and magnifies its importance as an object for prayer rather than an art piece to be examined.” 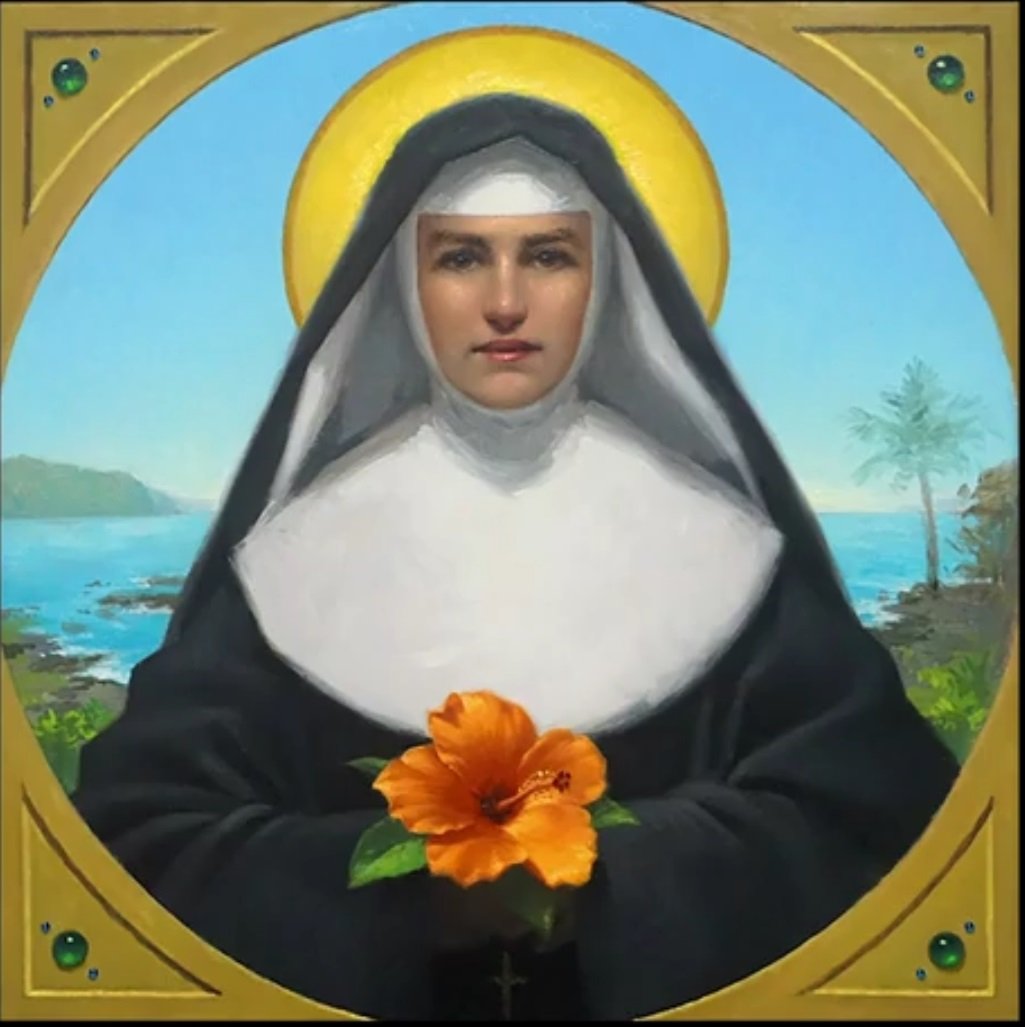 Third Prize was awarded to “St. Saint Marianne of Molokai” by Neilson Carlin, a 22 by 22 inch oil on canvas.

McNamara called the piece “strong example of devotional art which emphasizes the humanity and earthliness of a saint while masterfully giving her the stillness and glorified energy typical of iconic representation.”

He said the painting “captures the light and rich color of Molokai and an idealized, atmospheric background of jewel-like colors, setting both the historical scene and a sense of the saint’s currently heavenly home. The painting sets up the stark contrast of black and white of Marianne’s habit with the blues of sky and ocean, then is punctuated by the vibrant color of the hibiscus in her hands, giving the whole a luminous quality while remaining tangible and approachable. Her face reveals a heavenly serenity and idealization without losing her humanity, while the jeweled trompe l’oeil frame further indicates the image is more than a mere portrait, but meant for veneration and prayer.”

This Catholic Art Institute partners closely with the historic Saint John Cantius Catholic Church in downtown Chicago. Previous years’ conferences and events have been held at The Drake Hotel, drawing hundreds of artists and patrons together to meet with renowned philosophers and artists such as the late Sir Roger Scruton, Sculptor Alexander Stoddart, Artist Juliette Aristedes, Architect Duncan Stroik and many more.

To see all the artwork noted by the competition, click here.