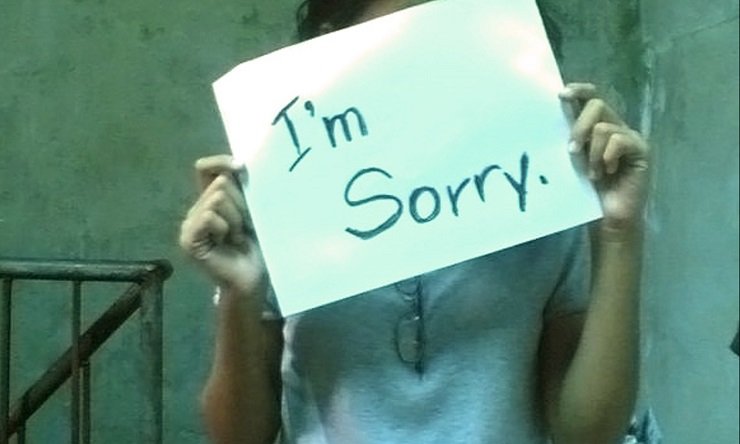 Wrath and anger are hateful things,
yet the sinner hugs them tight.
The vengeful will suffer the LORD’s vengeance,
for he remembers their sins in detail.
Forgive your neighbor’s injustice;
then when you pray, your own sins will be forgiven.
Sirach 27:30-28:7

For the blackness I’ve created
In the world that used to shine
I have wilted all the roses
And I spoiled all the wine
Just get out your magic pencil
And erase the cloudy skies
Just draw a picture of me
Saying, I apologize.
“Apologize,” Ed Ames

According to the technology company, Identity Guard, you and I make an average of 188 mistakes a year. Most of them are technological, but many can be avoided with a bit of care and double checking.

Then there are the all too human insults, rudeness, brashness, pettiness, and overt arrogance that present themselves as superior intelligence (bad idea: I’ve know people with a 6th grade education who had more common sense than some PhDs. That’s why there’s a difference between “education” and “learning”).

Then there’s the very human trait of ignoring someone important to you, either through simply not paying attention or, worse of course, willful disregard.

I like to think that in the more than 44 years I have been married, I have been an attentive and proactive spouse, and assisted my wife in as many situations as come up.

You and I know the truth. I have fallen down on the job, big time, many a time. I have likely been so busy living in my own skin, addressing my immediate needs, wants or desires, that an opportunity to step up and be a quality husband has been lost, at least for that moment.

So, I dust myself off, say “I’m sorry”, and thank her for forgiving my shortcomings.

Sirach instructs his followers to avoid vengeance, but to offer forgiveness. There’s so much more satisfaction in the end when we make the first step. Will there be a response in kind? If not, pray in thanksgiving that you have cleared your own heart, your own dark space, and bask in God’s forgiveness of your sin.