The Enormous Significance of Your Name 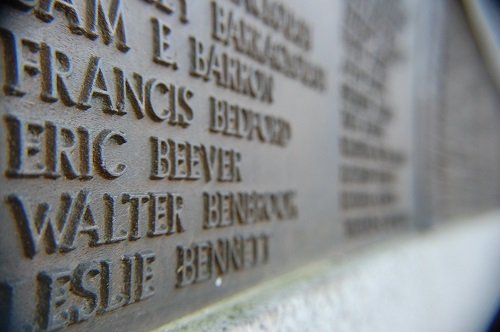 “The name is the icon of the person,” the Church teaches. “Everyone’s name is sacred.”

How so? I can think of at least five ways.

First, your name mysteriously sums you up.

We have all seen how this works. Often in a group of friends it is enough to just say the name of someone who is absent to get a reaction. Say the name of the funny friend, and the name alone will get a laugh. Name the person who did something terrible to you, and your friends will shudder or shake their heads. Name the friend everyone knows as loving and kind you will get, “Aw, I wish she were here!”

Just as a blessed object carries with it the prayers of the one who blessed it, a name carries the power and presence of the person it signifies. Above all this is true of God. His name saves, and to forget his name is to lose salvation. “Some boast of chariots, and some of horses,” says the Psalm, “but we boast of the name of the Lord our God.”

Your name is worth much less than God’s, but it is still worth more than silver and gold.

Second, your name represents your relationship with your parents.

Naming a child is a great responsibility. That’s why the Church’s Canon Law cautions  parents to avoid names “foreign to Christian sensibility.” Secular law has similar provisions, and parents have recently been denied permission to use profanity as a name, as well as “Lucifer,” “Violence,” and “Cyanide.”

Pope Francis said it beautifully in Amoris Laetitia: “God allows parents to choose the name by which he himself will call their child for all eternity.”

Your parents’ genes, present in you, shaped your body. Your parents’ values, in your upbringing, shaped your soul. And the name they gave the infant you rests at the core of your identity, a constant reminder that you are theirs and they are yours.

Third, your name represents your new family. You see it most clearly in wives.

At first, “I didn’t change my name,” said Kathy Schiffer. “Then our first daughter was born — and I had trouble getting to see her in the hospital because our names were different. I soon realized that I’d be the odd one out in the family. The following year, I had my name changed legally and gave the ‘new me’ to my husband as a Father’s Day gift.”

That’s a fourth point: A wife’s radical commitment calls a husband to reciprocate.

As Jesus put it, quoting Genesis, “A man shall leave his father and mother and be joined to his wife, and the two shall become one.”

Paul said this should cause a husband to see his wife as Jesus sees the Church. Jesus “gave himself up for her” to “sanctify her” making her “without blemish,” he said. Therefore, a husband should sacrifice for his wife, lead her to God, and never compromise her integrity for himself.

My Facebook friends who regretted their name change did so because their husbands had bitterly disappointed them. To them, the name ceased being a noble record of her commitment and became a shameful record of his abandonment.

Fifth, “The name one receives is a name for eternity,” the Church teaches.

The Book of Revelation adds something mysterious. We will each receive “a new name … which no one knows except him who receives it.”

This reminds me of author David Brooks’ description of how summer camp friends knew him by a special name.

“I have few friends left over from high school or college, but I have about 40 or 50 lifelong friends from camp, and for decades they did not even realize that Brooksie had a first name,” he said. “Every early metaphysical sensation happened, too—the feeling on a canoe trip of seeing a mountain at dawn, the way a simple rock can be coated with enchantment when it was the place you sat during the first raptures of teenage love.”

I personally think God’s name for us will be like that — a nickname touching our deepest self, filled with associations in our relationship that developed over decades. He will see who we are and call out the Israel in our Jacob and the Peter in our Simon.

I long to know who I will be.