The Power of Art Comes From God 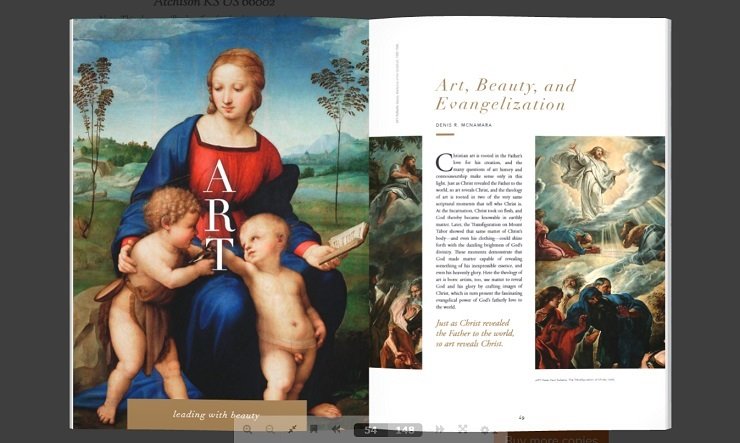 Denis McNamara, the director of the Center for Beauty and Culture at Benedictine College in Atchison, Kansas, is published in the new edition of the Journal for Evangelization & Culture, the quarterly publication of Bishop Robert Barron’s Word on Fire Institute. The journal’s mission is a great match with the Center for Beauty and Culture: The journal exists “to lead with beauty in order to bring others to the knowledge of truth.” Click here to get the journal. A brief excerpt from McNamara’s article follows.

Embedded within the word “imagination” is the idea of image. Humans are created in the image of God, for instance, meaning they participate in God’s own existence and powers. Adam and Eve were conceived in the mind of God but were also “crafted” by God, and in doing so he shared his imaginative power with his creation.

A typical scholastic definition describes imagination as a faculty of the mind in which one can represent to oneself a sensible object independent of an actual impression of that object on the senses. In other words, even though knowledge might begin with the senses, a human mind can form and hold an image of something it has never seen, like an angel or Christ in majesty.

Herein lies the special gift and vocation of the artist, who sees beyond what the senses perceive and strives to interpret what lies hidden behind reality’s surface, as St. John Paul II wrote in his Letter to Artists (LA, 6). True artists, he says, experience “the dazzling perfection of the beauty glimpsed in the ardor of the creative moment” (LA, 6) and then face the daunting task of crafting that image in the world. This “artistic creativity,” causes man “more than ever” to appear in the image of God because the artist does what God does: exercises “creative dominion over the universe which surrounds him” by “shaping the wondrous material of his own humanity.” Here beauty and the imagination find creative synthesis: an ontological revelation is given and something of the glorious mind of God is held in the artist’s creative imagination.

When artists have true moments of inspiration — literally, when the Spirit breathes into them — they are given a “momentary glimpse of the abyss of light which has its original wellspring in God” (LA, 6). Then they use intellect and mastery of craft to make those intuitions knowable to others.

In the highest art, God’s own glorious reality is made knowable through the matter and form of the artwork, just as it was in Christ’s transfigured body. And this divine existence, whose truth is at once accessible and unfathomable, fascinates and draws people to God through the “mysteries” to his reality.

The evangelical power of art, then, comes not from of the worldly charisma of the artist, but rather the charism of the artist who allows matter to become transparent to God’s compelling power, in other words, to allow Christ to be near us and therefore encountered. A Christian artist under the influence of the Holy Spirit is able to say “he who sees my work sees Christ, and he who sees Christ sees the Father.”