The Power of Inertia vs. the Return to Sunday Mass 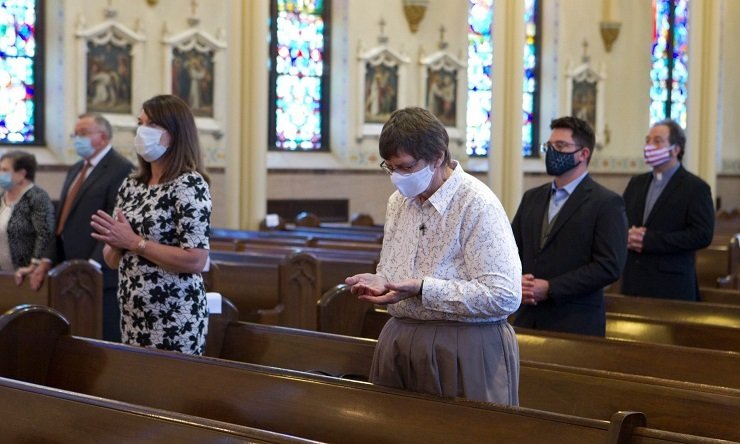 As parishes slowly open up public Masses, many people have stayed away.

No one is judged harshly regarding Mass in these strange times. Nor should they be. Everyone understands how widely varying people’s circumstances are with at-risk family members, travel restrictions, confusion over how to sign up or show up, etc.

But I also think we need to make great efforts to encourage people back to Sunday Mass, because we are facing off against the most powerful force in the universe, keeping us at home: The law of inertia.

Salespeople have been talking about the law of inertia for years.

It all started with an apple falling on Sir Isaac Newton’s head — or maybe he just saw apples falling, straight down. He wondered about it, studied it and wrote his great Principia, including his laws of motion.

Newton’s first law of motion — the “law of inertia,” valid to this day — says that an object at rest stays at rest and an object in motion stays in motion unless acted upon by another force.

Salespeople know this and use it. They know everyone prefers no change to change, so they make you feel like you need what they are selling just to maintain the level of comfort, pleasure, or lifestyle you are accustomed to.

Then, once you buy it, they try to get you on a subscription for more and more of it, so that inertia will kick in, making it harder to stop it than to just let it come.

In the spiritual life, we have the law of habit, which can be virtue … or vice.

Pope Francis told the heroic story about the Catholics of Tunisia whose habit of Mass led to a deep encounter with Christ. When Emperor Diocletian tried to force them to stop their gatherings, one famously said, “We cannot live without Sunday.” The Abitene martyrs died for Sunday Mass.

Every one of us can achieve that. Since virtues “are acquired and strengthened by the repetition of morally good acts” says the Church (No. 378) we just have to keep on doing the right thing.

On the other hand, Father Mike Schmitz tells the haunting story of a Chinese Catholic who endured torture to protect the ability of Catholics to attend Mass in China. But then he escaped to the United States, formed new habits, and stopped going to Mass.

Every one of us can end up there too. The Church says lots of activities are permissible on Sundays but warns, “provided that they do not lead to habits [that hurt] the holiness of Sunday” (No. 453).

Now is the perfect time for the Church — by which I mean you and me — to powerfully invite people back to Mass.

Think of how perfect the circumstances are. One Catholic message has always been, “Go to Mass because you have to.” That’s a powerful message, straight from the hand of God in the Ten Commandments.

But right now you don’t have to go to Mass. So why would you go?

Return to Mass because the world is scarier than ever, and if you could maintain your peace of mind without God before, you need him now — his wisdom in Scripture and his Real Presence in Communion.

Return to Mass because the pandemic has swept away all the idols. Whatever we hoped in — politicians, the economy, health and medicine — we know now it is not worthy of our hope. Only God is.

Return to Mass even if it feels like a risk, says my own archbishop. They’ve made Mass very safe, but he pointed to Catholics who have taken risks to receive Christ for centuries. Here are more.

I could go on and on with reasons to go to Sunday Mass (wait, I did …). But my wife says the Church needs a message like Nike’s “Just do it.”

For all its mighty power, inertia is not, ultimately, the world’s greatest force. Our free will is stronger. All it takes is to swat an apple as it drops, call the parish office to see how Mass works now — or call the folks we haven’t seen at Mass yet, chat them up, and invite them.

Tell them how it will maintain the life they love, and that we would all be glad to see them.

This appeared at Aleteia.
Photograph: The Leaven.