This Sunday: Meet God Face to Face in Lent 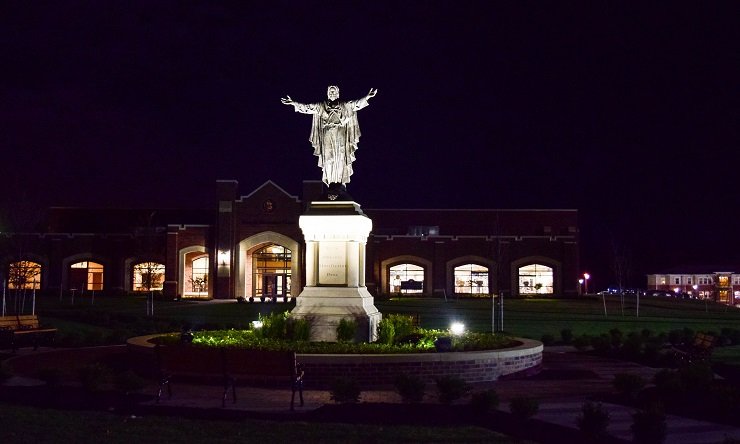 “Wait … tell me again why we’re doing this?”

This Sunday, the Second Sunday of Lent Year A, we find the Church anticipating that question as the novelty of ashes-on-forehead and “What are you giving up for Lent?” wears off.

Jesus reminds us who he really is, and what we are really doing. At Christmas, he was humble, in a crib, and we were adorers. Last week he was suffering in the desert, and we were imitators. Today, he is God almighty and we are partners in salvation history..

Peter, James and John get a glimpse of who Jesus always was, and the company he always keeps.

Jesus took Peter, James and John up a mountainside where “he was transfigured before them; his face shone like the sun and his clothes became white as light.” Beside him appeared Moses and Elijah, and while he spoke with them, “a bright cloud cast a shadow over them,” indicating the presence of the Holy Spirit, and a voice thundered, calling him “my beloved Son.”

The scene tells them everything: Jesus is no mere teacher, but the pinnacle of salvation history. He keeps company not just with the great lawgiver and the great prophet; he keeps company with the Trinity. And he is not in that company alone; he invites Peter, James and John, representing his new Church, in with him.

Moses appears with Jesus because he showed the way. But Jesus Christ is the Way.

For many long years, God has been trying to rein in his people, to make them understand why they were made and how they must act. It started when he told Abram “I will make of you a great nation, and I will bless you; I will make your name great, so that you will be a blessing.”

The covenant with Abraham was sealed with the law he gave to Moses, and it made the Jewish people the Chosen People because God kept coming to them, by his own initiative, to show through them who he was.

But in the transfiguration, Jesus is fulfilling his old covenant promise in a new way, by preparing for his new covenant, which Peter, James and John will offer the world in the Church. The law is no longer just stone tablets to model their life; it is Jesus Christ, the Way, who puts the law in their very hearts.

Elijah appears because he shares the truth fearlessly. But Jesus Christ is the Truth who casts out fear.

Elijah is called “the father of the prophets” and Sunday’s Psalm is reminiscent the message, which he delivered despite hardship, drought, and an onslaught by pagan priests: “See, the eyes of the Lord are upon those who fear him,” it says, “To deliver them from death and preserve them in spite of famine.”

Elijah spent his life courageously seeking the face of God but never saw it. Now he reveals that the Apostles, and every Christian, effortlessly receives the gift he sought.

Each of us in the Church is now placed in the  position of Elijah. We have each been given a one-on-one encounter with God, and we are each tasked with delivering his Truth. “Bear your share of hardship for the gospel with the strength that comes from God,” says St Paul.

Jesus invites New Testament leaders, too, because he is not just the Way and the Truth — he is also the Life.

Now Peter, James and John meet him with Moses and Elijah on Mount Tabor and the Father proclaims: “This is my beloved Son, with whom I am well pleased; listen to him.” What will they hear if they listen to him? They will find out soon enough.

Within weeks, Jesus will be telling them on the eve of his death: “If a man loves me he will keep my word and my Father will love him and we will come to him and make our home with him.”

“He saved us and called us to a holy life,” says St. Paul, “through the appearance of our savior Christ Jesus, who destroyed death and brought life and immortality.”

This is the true end of Lent: To enter into a face-to-face relationship with God in Jesus Christ.

Last week, the readings said that Lent is a battle Satan. This week, they say it is far, far more than that: Lent is an embrace by the Trinity.

How do we enter that life? There is no secret, special way; no obscure mysticism; no complicated system to learn. It takes the three basics of Lent fasting, prayer and almsgiving.

Nothing less is expected of each of us.