This Sunday, Live the Passion in Your Life 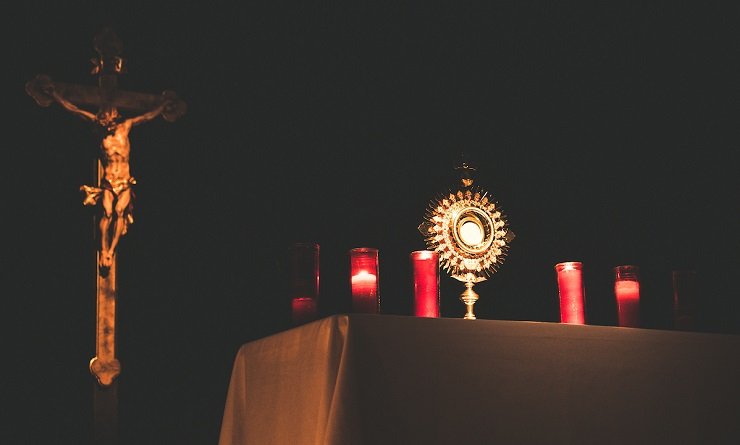 On Passion Sunday, Year A, we get a miniature version of the whole of Holy Week, hearing about the Last Supper, death and crucifixion of Our Lord.

We also get a miniature guide to the Christian life. After all Jesus said, “If anyone wishes to come after me, he must deny himself and take up his cross daily and follow me.”

First, the Passion shows the logic of sin.

As the Gospel opens, Judas says, “What are you willing to give me if I hand him over to you?” That is the basic form of each of our sins, as we barter to understand what we can get or do that is better than Christ.

Peter’s sin comes from his quick embrace of Jesus followed by his hasty denial. He tells Jesus that his faith will never be shaken, that he would die for him rather than deny him, and even lashes out with his sword for Jesus. But then he claims he has never even known Jesus to avoid embarrassment with bystanders at the trial of Christ. He loves Jesus when the moment is right, and he drops him when it’s not. This is us when our faith life is driven by our emotions. We are all for Jesus when we are stirred by spiritual excitement, but if that is what we are in it for, we will follow whatever more powerful emotion comes along.

The Gospel gives us a clever illustration of what this faith looks like. We get so excited about our faith, we “cut off the ears” of our listeners by being off-putting, and when we are no longer in the mood, we say nothing at all with to those who ask about him.

Pilate’s sin is different. Pilate wants to somehow be in favor of Jesus without going to any trouble for him. He recognizes that there is something special about Jesus, and his wife tells him so, too. But too much would have to change in his life to add respect for Jesus to it. So he sends Jesus away. That is us, thinking we don’t really denounce Jesus, even while we bar him from acting in our lives and consign him to oblivion in our minds.

This is what we do whenever we project our own expectations onto Jesus. We assume that he would support our lifestyle, our political preferences, and our way of dealing with others. We are not willing to admit that we might ever be wrong, so we never change our lives, we simply change our conception of Jesus. But that means we reject the real Jesus.

The bystanders who mock Jesus at the trial and at the crucifixion have a more secular way of dismissing Jesus. They slap him and say, “Prophesy for us, Christ: Who is it that struck you?” and when they see him on the cross they say “He saved others; he cannot save himself.” They think of Jesus as a figure of myth and legend, and judge him as they would a myth or legend.

But Jesus is not a part of our reality that we control. We are a part of his reality.

Jesus describes his power and divinity clearly. “Do you think that I cannot call upon my Father and he will not provide me at this moment with more than twelve legions of angels?” he asks Peter. “All this has come to pass that the writings of the prophets may be fulfilled,” he tells his attackers. “From now on you will see ‘the Son of Man seated at the right hand of the Power’ and ‘coming on the clouds of heaven,’” he tells the Sanhedrin.

Jesus shows us a glimpse of the inner life of the Trinity when he says “I shall not drink this fruit of the vine until the day when I drink it with you new in the kingdom of my Father,” and, “Father, if it is not possible that this cup pass without my drinking it, your will be done!”

Finally, Jesus invites Christians into his own relationship with the Father when he says, “Take and eat; this is my body,” and when he passes the cup he says, “Drink from it, all of you, for this is my blood of the covenant which will be shed on behalf of many for the forgiveness of sins.”

This is what the incarnation means: The all-powerful God makes himself small to coax us into a loving relationship with him.


This is what the first readings at Mass tell us, from “Behold, your king comes to you, meek and riding on an ass,” in the introduction to “I gave my back to those who beat me, my cheeks to those who plucked my beard” in the First Reading.

St. Paul sums up the Christian mystery with, “though he was in the form of God, did not regard equality with God something to be grasped” but took “the form of a slave” and became “obedient to the point of death, even death on a cross.”

And now, “at the name of Jesus every knee should bend, of those in heaven and on earth and under the earth, and every tongue confess that Jesus Christ is Lord, to the glory of God the Father.”

This is Christianity, pure and simple. It starts in rejecting sin, unites with Christ in the Eucharist, then proceeds through the way of the cross to eternal glory.

Image: Eucharistic Adoration is part of the Underground program for students at Benedictine College in Atchison, Kansas.