What His Workroom Tells Us About St. Jerome 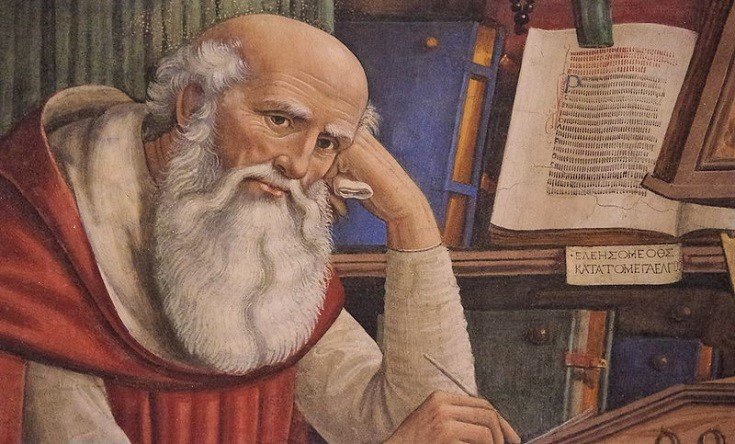 Though many artists have shown St. Jerome (347-420) as the emaciated ascetic kneeling on rocks while living in a cave, Domenico Ghirlandaio painted him in a well-furnished study on the walls of the Florentine Church of Ognissanti in 1480.

The initial stirrings of the Renaissance and its love of all things ancient had matured by the late 15th century, and Jerome held more than a pious interest to Renaissance thinkers. A contemporary of Saint Augustine of Hippo, Jerome fascinated Florentines for having acquired Christian knowledge and holiness in the early centuries of the Church while its feet were still dipped in classical learning.

Accordingly, he is shown as a scholarly Doctor of the Church, as indicated by his dress in cardinalatial red with his cardinal’s hat on the shelf behind, even though in actuality this attire developed several centuries later. 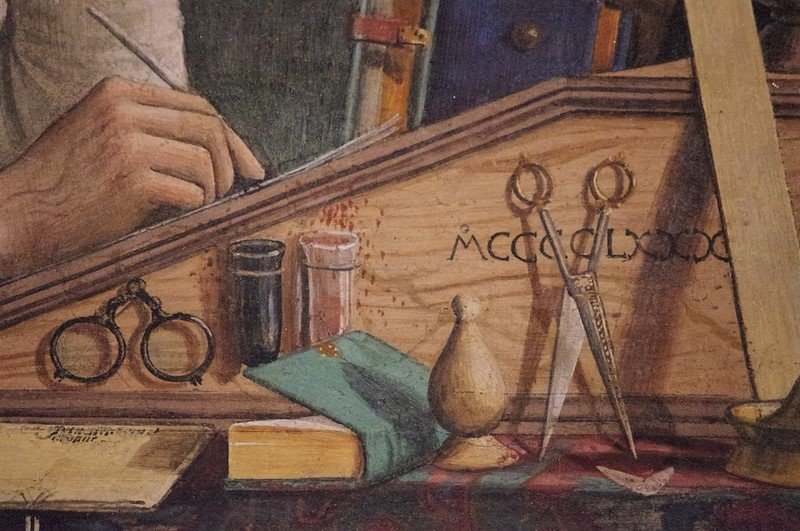 Jerome’s small study shows a wealth of detail worthy of a scholar and translator: pens, ink, scissors, books, parchments, eyeglasses (also not yet invented in his time), and candles. Though Jerome shows a contemplative stillness, his active life is indicated as well: he holds a pen in his hand, translating Scripture into the Latin edition now known as the Vulgate. The two inkwells subtly indicate this work: both the black ink, for text, and red ink, for rubrics, have splashed against the wood of his writing desk from repeated use.

He clutches a folded piece of paper in his left hand, a reference to his nearly 120 existing letters, which were particularly prized in the Renaissance for their breadth of topics and revelation of Jerome’s spiky personality. Jerome’s eyes reveal a depth of pathos, his mouth a hint of a smile, and forehead creases indicate a life of thoughtfulness and animation. The entire scene gives a combined sense of energy and weariness typical of a long life of dedicated labor.

Though Saint Jerome was an ascetic and a monk, the artistic conventions of the Renaissance show his study overflowing with objects on high shelves that give the viewer ideas to contemplate. Half-filled carafes on the upper right symbolize the perpetual virginity of the Virgin Mary, a theological position staunchly supported by Jerome in an influential treatise. A round wooden box is topped with fruit, in itself a small tableau concerning the mysteries of sin and salvation.

The fruit calls to mind the poisonous apple of Adam and Eve’s fall in the Garden of Eden, the food of spiritual sickness and eternal damnation. By contrast, the round box below has been identified by scholars as a large pyx holding Eucharistic hosts, the food of salvation and the medicine of eternal life, an idea central to Jerome’s thought and writings as an answer to the sin of Adam. In a similar vein, the apothecary jar with Christ’s monogram — the HIS — likewise speaks of Christ as a spiritual remedy for fallen humanity.

In Jerome’s time, knowledge of Hebrew was not common in Christian circles, and he insisted upon translating the Old Testament from the Hebrew rather than the Greek translation known as the Septuagint. He consulted with Jewish scholars for both linguistic and interpretive help, often facing criticism from fellow Christians for doing so. Later centuries praised him for his intellectual rigor, and Ghirlandaio’s painting is filled not only with books, but also with pieces of text on scrolls and bits of paper pinned here and there, displaying the ancient languages Jerome mastered in order to translate the Scriptures. The study of inscriptions, known as epigraphy, not only interests modern art historians, but fascinated Renaissance humanists who cherished ancient languages and learning.