Yes, Mary Knew: Why I Banned That Song 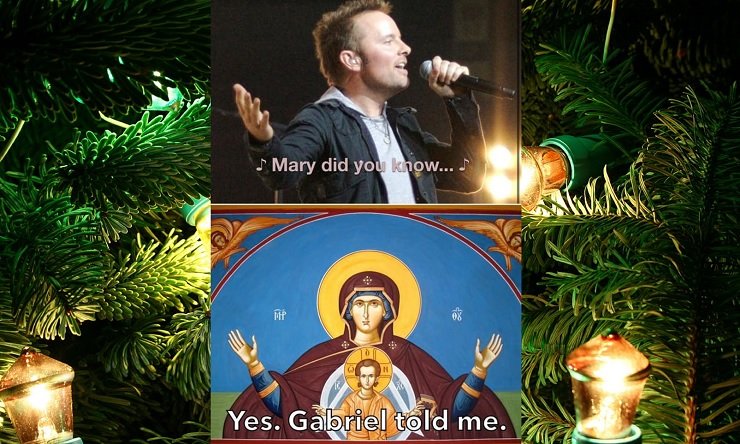 Father James Dean of Prattville, Ala., a faithful Gregorian reader, offers this response to the article “In Defense of Mary Did you Know?”

We declare, pronounce, and define that the doctrine which holds that the most Blessed Virgin Mary, in the first instance of her conception, by a singular grace and privilege granted by Almighty God, in view of the merits of Jesus Christ, the Savior of the human race, was preserved free from all stain of original sin, is a doctrine revealed by God and therefore to be believed firmly and constantly by all the faithful (Ineffabilis Deus, December 8, 1854, emphasis added).

Second, the most troublesome question in the song doesn’t trouble me, for one. “Did you know that your Baby Boy has come to make you new? / This Child that you delivered will soon deliver you.”

Yes, as we will celebrate on Dec. 8, Mary was immaculately conceived: She was already “delivered” when she delivered Jesus. But she was delivered precisely by the death and resurrection of Christ, which from the point of view of the manger was an event in the future. This is possible for God, who is not constrained by time, but for Mary, who is constrained by time, the fact that her past deliverance was still in the future was definitely worth spending some time pondering.

Though the redemption of the human race was to take place at a future time than the birth of Jesus, it was not so with Mary.  At the manger, Mary was already delivered.  Her redemption was not still to come at the crucifixion — for it was not at the chronological time of the crucifixion that the grace was brought back in time to retroactively preserve Mary from sin, it was at her conception that the grace was transported from the future event of the crucifixion back to Mary (as God is outside of space and time) to preserve her from being tainted by the stain of original sin.

So, in contradiction to Ineffabilis Deus, the thought that, “for Mary, who is constrained by time, the fact that her past deliverance was still in the future …” is heretical, for Mary, even at the manger, was at that very moment, without sin, since her conception!