After the Ascension, After Graduation … Now What? 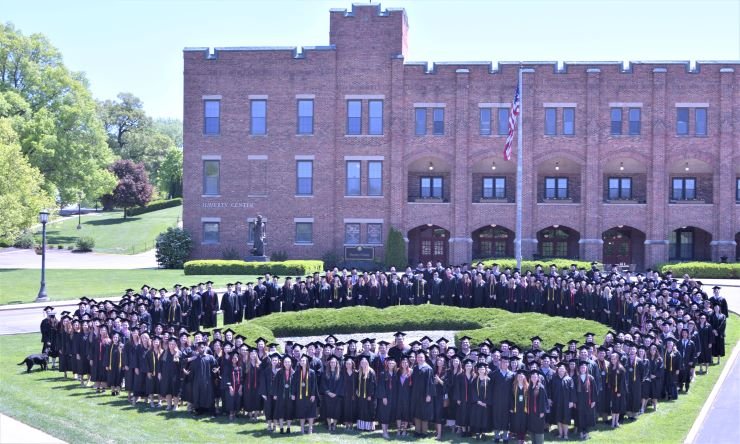 While they were looking intently at the sky as he was going,
suddenly, two men dressed in white garments stood beside them.
They said, “Men of Galilee,
why are you standing there looking at the sky?
This Jesus who has been taken up from you into heaven
will return in the same way as you have seen him going into heaven.”
Acts 1:11

May all I do today begin with you, O Lord.
Plant dreams and hopes within my soul,
revive my tired spirit:
be with me today.
Be With Me Today, O Lord: Catholic Online

All they could do was stare at the sky.

They had come to know Christ, not as slaves, but as friends. They witnessed His miracles, worked to understand His mission on earth, fell to human failings during His passion and death, and, yes, rejoicing at His resurrection.

And now the “Men of Galilee” were on their own, alive in the Spirit, and bolstered in Jesus’ promise that He would return, as he left. He had given them specific instructions and powers, and chose their leader, Peter, the most reluctant of the eleven.

This moment was where it began. The beginnings of the Church, and the task of proclaiming the Good News.

Where to start. What was next. We can’t go back once we’ve “crossed the line”. Our journey is underway, with God’s help and Our Lord’s love.

Our Benedictine College graduating classes of 2020 and 2021 have been “sent forth” in somewhat the same manner. They are armed with knowledge, strong in their faith, full of hope as we as a learning community have said goodbye. We were fortunate that the rain ended in time for the faculty could create the path for those graduates to pas through, with our applause, handshakes, and hugs. It was so uplifting.

Ironically, I learned that, on the same day as Commencement, a former student, who over the past four years, joined my wife and me for mass and a meal on a few occasions, said her  goodbye to Atchison, headed on her way to her new adventure.

As each of these folks move to the next phase, as they start jobs, school, or marriage, there will come the moment they ask, in silence, “Now, what”?  What is expected of me in my new role? Will I make friends there? Will I succeed? What if I don’t know what to do? Lord, what do you want from me?

I have included the clip from a favorite movie “Field of Dreams” where Ray’s brother yells at him for being a failure in pursuing the dream of the re-creation of a controversial baseball game. There is a pivotal moment you can see where, in a moment of high tension, “Moonlight Graham”, a man who played a half inning in a major league game, but left the sport to become a doctor, comes from the past to give comfort and hope, but must go back to his past as others are allowed to live out their dream. There are so many metaphors in the movie, and the book from whence it was created, “Shoeless Joe”.

The message, from the “rookie”, from we adults to our graduates, from the two men talking to the disciples as Jesus ascended to take His place with His Father is the same as God’s message to Joshua:

Be Not Afraid. I go before you always. Come, follow me, and I will give your rest.