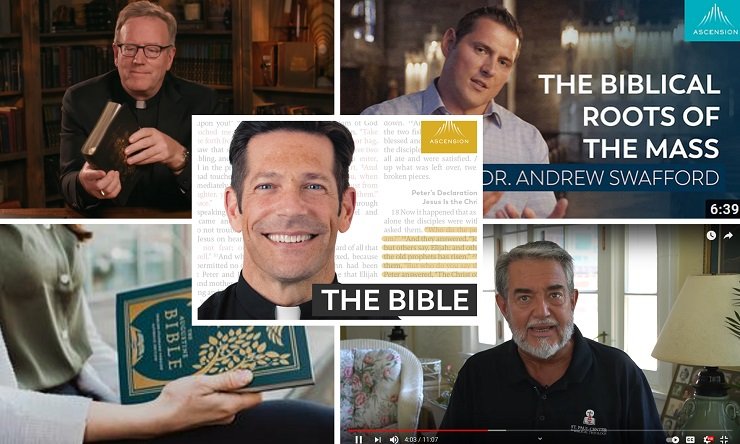 We’re in the middle of a Scriptural renaissance. Have you noticed? Let me explain, and then suggest what will come next.

From Scott Hahn’s remarkable St. Paul Center to Holy Heroes, Catholics of all ages are rediscovering and immersing themselves in Scripture.

The best example has to be the Bible in a Year Podcastby Father Michael Schmitz, which held the record for the most downloaded podcast on Apple for days. I have long been a fan of Father Schmitz, whose YouTube answers to hot-button spiritual questions are spot on, and whose homilies, I discovered during the pandemic, are both profound and relevant.

Like many others I started his podcast in Lent. My son and I were eagerly enrolled in the The Great Adventure Biblestudy program the podcast is based on when the pandemic hit and the group had to disband. But I loved its approach to reading the Bible in the order of its story and themes rather than from page 1 sequentially through to the end. This “isn’t just about learning,” said Benedictine College’s Dr. Andrew Swafford, a collaborator on the Bible. “It’s about transformation.” Ascension tags its Bible products among its best sellers, and it has sold out of several Scripture related products, including the Bible itself.

That is also what a different Bible in a Year program from Augustine Institute aims for. My friend Peter Wolfgang raved about it — sometimes eagerly posting pictures of pages he was reading on his Facebook page. He and his wife, Leslie, chose the year 2020 to go through the program. “There are no coincidences,” he said. “What a comfort, and a guide, those 20 minutes every morning were in that bizarre year.”

Word on Fire has also grown in popularity in the past year, with its founder Bishop Robert Barron leading the way with his weekly homilies focusing on the Old Testament. Elizabeth Scalia, a former Aleteia editor, is now a Word on Fire editor with a new course there about Evangelization. She told me one reason for Scripture’s new popularity is that “There is a hunger for plain-speaking to the human condition,” and Scripture “is grounding, solid, and unchanging.”

I turn to the new Word on Fire Bible: Vol. 1, The Gospelsat least weekly. It has great notes — often more notes than Scripture in fact, but that’s okay, because it makes the Gospels come alive with meaning rooted deeply in the Old Testament. I am lucky to have it. Shortly after my wife pre-ordered it, Word on Fire announced “Due to overwhelming demand, the leather edition sold out within a few hours, and the hardcover edition within a few days. We were hoping to sell 50,000 copies during the first year, but we really needed that many copies for the first day!”

These new Scriptural studies tend to use the Revised Standard Version translation of  Scripture but the new Augustine Bible, a beautiful edition,uses the English Standard version, which some consider the best. I first became aware of it when a friend on Facebook excitedly recommended it and used it in a Biblical discussion I had with my sons last week. The Bible is the Augustine Institute’s best selling book, followed by several other Scripture-related titles.


One unsung Scripture story of 2020 is of historical significance: the King James Bible for Catholicspublished in September by U.K.’s Walsingham Publishing. It puts the “Catholic books” of the Bible, the Apocrypha, into the places where they belong, and adds a few extra changes and notes according to the 2008 letter from the Congregation of Divine Worship written at Pope Benedict’s request, but otherwise delivers the translation of Scripture that shaped the English language.

Jimmy Akin’s Catholic Answers book The Bible is a Catholic Bookis a great companion for this rediscovery of Scripture, and its theme seems to be born out in a new YouTube resurgence of interest in the Church and Scripture that I first heard about from college students, who are watching YouTubers from the Evangelical Protestant Austin Suggs of Gospel Simplicity, to2006 convert Ted Janiszewski, Director of St. Irenaeus Ministries in Rochester, N.Y.

Janiszewski told me, “Young people are flocking to our ministry, some Catholic, many Protestant and seeking. And they’re thirsty for the Scriptures — to drink from the fountainhead of faith.”

I asked him why and he couldn’t settle on a reason. “The only explanation I can think of that really accounts for what we’re seeing is that the Holy Spirit is stoking the flames of revival,” he said.

That’s exactly what I was thinking. St. John Paul II, Pope Benedict XVI, and Pope Francis have all called for prayers for a “New Pentecost” in America. Many dioceses took up the prayer. God, I think, is answering.

And what will follow a flowering of interest in the Scripture? The one thing that always does: A new springtime of the faith.

call to prayer, the Church in a pandemic