God’s Power Is in His Love: Choral Piece Debuts 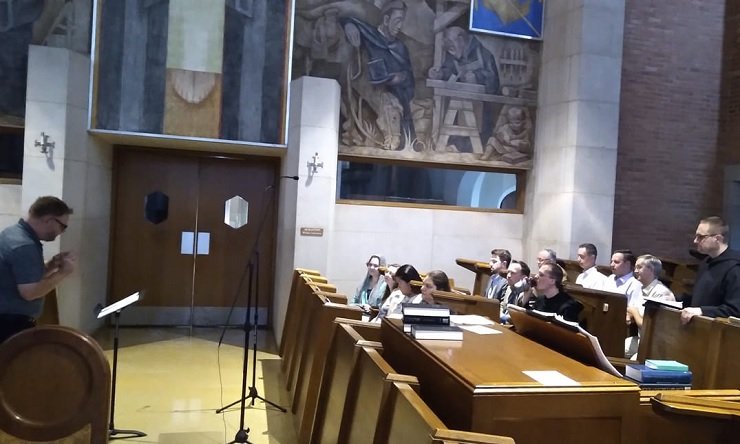 “Community, faith and scholarship really came together here,” said Denis McNamara, director of the Center for Beauty and Culture at Benedictine College in Atchison, Kansas.

As a program of the Center, Timothy Tharaldson, composed a choral piece based on the text of a poem by McNamara, the center’s director, which was translated into Latin by Benedictine classicist Edward Mulholland. The college’s Alumni Schola sang the piece at Mass at St. Benedict’s Abbey on Alumni Reunion Weekend, June 13.

Benedictine College’s music department has added an emphasis in Liturgical Music to its program’s offerings.

The original poem, based on a passage in Isaiah, “just flowed right out of my hand one day in about 60 seconds after praying a bit,” said McNamara.

He said it was inspired by a conversation with a professor of literature and though it is short, the poem is “the fruit of a long time of theological thinking on my part in some ways.”

He said he learned that “God as Father is love Itself by definition, as Scripture repeats many times. Yet many people, especially people who rightly take their Catholic faith seriously, can fall into the trap of Jansenist piety, which sees God as disproportionately angry, harsh, and distant and therefore people must be disproportionately weighed down by fear and thoughts of damnation.”

Timothy Tharaldson said that the music itself is meant to reflect that. “It’s talking about this prayer, merging with eternity. It’s not big and boisterous, it’s the exact opposite. It’s the Father’s loving arms.”

God does punish, of course, McNamara said, “but that punishment is not His primary goal, but rather something he only uses to bring people back to him so he can love them, much like an earthly parent only disciplines when absolutely necessary. And every parent’s desire is that their child come to them in trusting love, asking to be taught and formed by their parent’s love and wisdom.”

Tharaldson said he also created the music in a short period of time. “This text was so good, and it just worked for me,” he said. “It is about what the Father says. We all know we don’t always listen when he says something. That’s why he says it twice, and the music changes something. ‘I will love you,’ ‘I will teach you,’ and ‘I found peace.’”

The Alumni Schola sang the piece at St. Benedict’s Abbey on Alumni Weekend. Ryan Maderak, a 2003 alumnus of the college and current Chair of the college’s Astronomy Department, said, “What a joy to get to sing with fellow alumni again! Thank you to my dear friend Tim Tharaldson for making this happen.”

Beth West, class of 2004, said, “This was the first time I have really sung since having surgery this past December.  What a blessing that I was able to officially ‘come back’ in one of my most favorite places in the world.”

McNamara said the title of the song comes from Isaiah chapter 52 which speaks of God baring his holy arm. This “at first may sounds threatening, but God’s omnipotence — his power — is a sign of His ability to conquer sin and death and therefore save us.”

In fact, he said, the verse shows how God’s power brings comfort:

“Break forth into joy, sing together,
You waste places of Jerusalem!
For the Lord has comforted His people,
He has redeemed Jerusalem.
The Lord has made bare His holy arm
In the eyes of all the nations;
And all the ends of the earth shall see
The salvation of our God.”

The piece based on this is “just a simple little poem, and sometimes reading something in English can seem like it is under too bright light — too obvious. Putting it in Latin gives it something of a ‘veil’ that the listener or reader must ‘lift’ to understand,” he said. “It slows down the immediate perception and  causes deeper intentionality and reflection on the meaning of the words. And fortunately Dr. Mulholland, who is so skilled in Latin, was eager to translate it for me. He asked a number of poignant questions about the intention and meaning of certain words so that he could choose just the right word in Latin.”

Here is the poem in Mulholland’s transation:

The Father says:
“Come to Me
And I will love you
And I will teach you.”
And all is warm
And safe
And strong.
And temporality merges with eternity.
Peace. Peace. Peace.

“As I see it,” said McNamara, “in this little interdepartmental faculty collaboration, we have beauty and culture coming to life — the truth about God is expressed in a scholarly way requiring Dr. Mulholland’s knowledge of Latin, and Dr. Tharaldson’s music clothes the text in splendor, which makes people want to listen and think about the truth — and hopefully accept it.”

Here is the Beauty and Culture event debuting the choral piece last year. To hear the piece sung, go to minute 42:50: