The mission of Benedictine College in Atchison, Kansas, has a powerful effect on students. Just ask 10 priests who went to school together there 30 years ago. 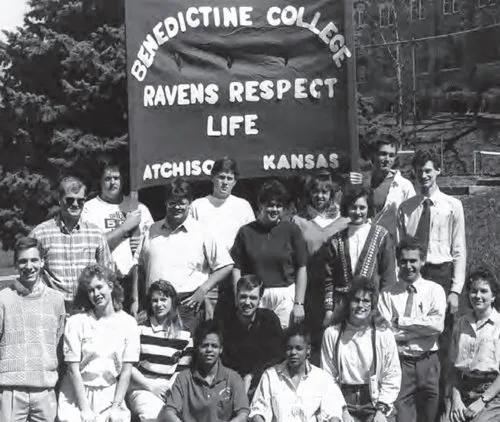 “At a small Catholic college in a small Midwestern town, a small group of students gathered Monday nights for a prayer group that would have a big impact,” The Catholic Spirit reported this week. “At the center of the group was a scrawny young man strumming guitar, a student who radiated equal parts levity and piety and would one day be appointed bishop of the Diocese of Crookston.”

Crookston Bishop Andrew Cozzens was known on campus in the early 1990s as “Drew,” reports Christina Capecchi. “He worked for the student newspaper, he served as a resident assistant at St. Joseph Hall, he was a fixture at daily Mass and a linchpin in the homecoming festivities,” she adds.

But he was also at the center of a group of fans of Pope John Paul II who had discovered prayer through the Catholic Charismatic Renewal. He also helped found the pro-life group on campus, Ravens Respect life.

The group waxed and waned in size, but eventually produced 10 vocations.

“It was the perfect environment to grow up in because you had good intellectual formation — an excellent philosophy department — good spiritual direction and the prayer group and good friends,” Father Joseph Taphorn, class of 1993, is quoted saying.

Norbertine Father Alphonsus Hermes, Class of 1992, said the prayer group showed him that “normal” people could be religious.

The article named these members of the prayer group that went on to leadership positions in the Church:

“It was contagious because there were about 10 of us who entered religious life or the priesthood during the four years I was there,” Father Hermes said. 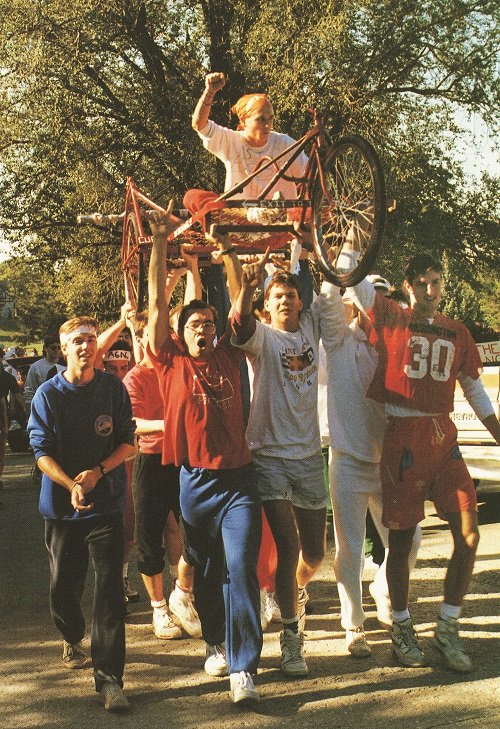 “They were openly pursuing the priesthood, and that allowed me to open up to several people who had suggested it to me before that,” he is quoted saying. Father Hermes lives in St. Michael’s Abbey in Silverado, Calif. “Seeing them actually interested, and not ashamed about it — that was very encouraging for me.”

Dominican Father Andrew Hofer, class of 1994, who lives at St. Dominic Priory in Washington, D.C., said Bishop Cozzens’ leadership in the group helped him find his vocation, too.

“It’s a great grace of God to see how many priestly and religious vocations came from a group of friends at Benedictine College in the early 1990s,” he said.

The article mentioned one thing Drew Cozzens was known for in the 1990s: piloting the winning bed in the college bedraces (shown, right). Above: His Raven friends reunite on campus, including Father Dan Andrews, Father Taphorn and, on the righthand side of the picture, his sister, Benedictine College Board of Directors member Helen Healy.

President Stephen D. Minnis said that these stories are not atypical of what happens at the college. “These priests show how powerful our mission truly is,” he said. “Their story is especially encouraging as the college has launched plans to Transform Culture in America through our mission of community, faith and scholarship.”

Citing a spate of recent articles about the dearth of men in college, he said Benedictine College is breaking the mold.

“I think it’s important that men continue to have the experience of college that these men had,” he said. “Benedictine College’s male-female ratio is 49% -51% , which is 10 points better than the national average, and leads even among peer schools.”

Today, the group promotes Benedictine College’s community-building mission from within the priesthood.

“Life is hard,” Father Taphorn is quoted saying. “Life can be lonely, but it doesn’t need to be. We’re called to be in community. We can find support from others and share life, and the most important thing we can share is our faith.”

Father Hermes agrees. “We all need community,” he told the paper. “It is not good for man to be alone. Even when he’s elevated, Bishop Cozzens is still in close contact with the priests he met from college.”