If Everyone Did This, the Church Crisis Would End 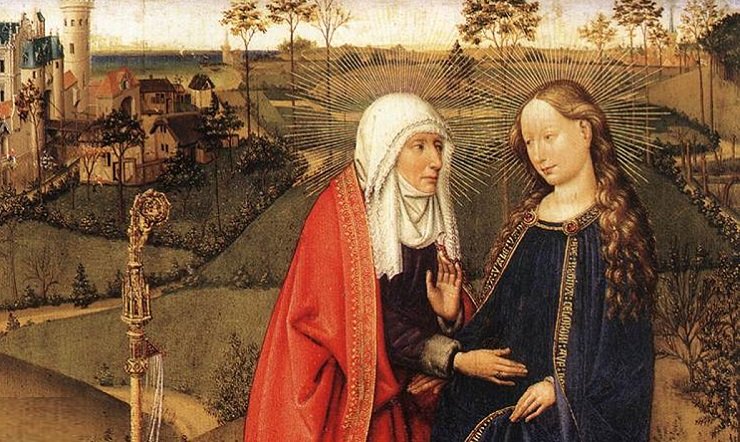 Many Catholics are worried as the pandemic ends about troubling signs in the faith. Mary has the answer, as she so often does.

It wasn’t long ago that Pew reported that “Just one-third of U.S. Catholics agree with their church that Eucharist is body, blood of Christ.” Now, “U.S. Church Membership Falls Below the Majority for the First Time,” Gallup reported in March.

There is much hand-wringing over these numbers: Whose fault is it? And whose job is it to fix it? Who can possibly reach so many people that need to be reached?

The answer is there in the Visitation: Every single one of us.

The Blessed Virgin Mary became the first Christian in history when the Angel Gabriel came to her and gave her the opportunity to be the Mother of Jesus.

That means the first thing a Christian ever did was say “Behold, I am the handmaid of the Lord; let it be done to me according to thy word.” That was Mary’s Fiat, her great acceptance of God’s will in her life.

The second thing a Christian ever did is the very next line in the Gospel: “Mary arose and went with haste into the hill country,” to visit her pregnant cousin, Elizabeth, the wife of Zechariah, the priest.

The distinction is often made between the “vertical” dimension of our Christian life — our praise and worship of God — and the “horizontal” dimension — our service to neighbor.

You can’t do one without the other.

Notice what Mary didn’t do.

Mary didn’t complain that the Jewish leaders of the time weren’t helping her. She didn’t worry that she was being sent to the house of a priest who had been struck dumb because he wouldn’t follow God’s will.

Mary didn’t assume that someone who lived closer to Elizabeth would be helping her. She didn’t decide, “She lives in the mountains. I can’t be expected to go all the way there.”

Mary didn’t say, “I have just been given a great task, to be the mother of the holy son of God. I shouldn’t risk myself on serving someone with a lesser calling.”

She didn’t decide to simply pray for Elizabeth or send her a letter.

Mary “went in haste” to her, despite all the obstacles. And Mary didn’t just serve Elizabeth’s needs. She taught her about the power of God and prayed with her, in the great prayer called The Magnificat.

Her son would later apply this course of action to each of also, saying, “I was a stranger and you welcomed me … I was sick and you visited me … as you did it to one of the least of my brethren, you did it to me.”

Imagine how the culture would change if we each did what Mary did.

Imagine what would happen if each of us followed what St. Paul counsels in one of the readings on the Feast of the Visitation:

“[L]ove one another with mutual affection; anticipate one another in showing honor. Do not grow slack in zeal, be fervent in spirit, serve the Lord. Rejoice in hope, endure in affliction, persevere in prayer. Contribute to the needs of the holy ones, exercise hospitality. Bless those who persecute you, bless and do not curse them. Rejoice with those who rejoice, weep with those who weep. Have the same regard for one another; do not be haughty but associate with the lowly; do not be wise in your own estimation.”

If each of us visited just one fallen-away Catholic, and committed to sharing their joys and sorrows, serving their needs, answering their questions, and praying with them, we know what would happen, because the story is there in the Early Church, and in every age since.

The crisis of faith would be over and the culture would be transformed.

More: Read Tom Hoopes’ Love Thy Neighbor series in the National Catholic Register.
Part 1, ‘Love Your Neighbor. Everything Depends on It.’ here.
Part 2, ‘Laity Will Determine the Future After the Pandemic’ here.
Part 3, ‘In a World Gone Mad, What Would John Paul II Do?’ here.