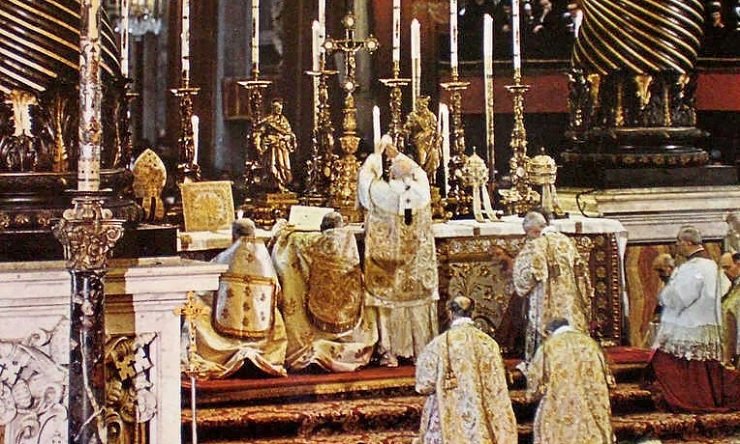 Intelligent questions have a way of making both the asker and the asked more thoughtful. I often give presentations in parishes, online, or in classrooms, and get asked very good questions. I shared some of the most frequently asked questions in Part One, in which the questions centered mainly on the Second Vatican Council. In Part Two, here are some questions addressing early and modern forms of worship.

The upper room of the Last Supper was a simple place for the Passover meal. Jesus never wore fancy vestments or drank from gold cups. Why should we do this in the liturgy? Shouldn’t we give money to the poor instead?

Because the Sacred Liturgy is in one sense a memorial of the Last Supper, many people often think that the liturgy is supposed to imitate the earthly lifetime of Christ. However, it should be remembered that at the Incarnation, Christ veiled His divinity and power with only a few exceptions, such as His miracles and the Transfiguration. The Catholic liturgy is not primarily a recall of the earthly Christ, but a foretaste of the heavenly Christ of the Second Coming. The fourth-century bishop Saint Cyril of Jerusalem wrote of Christ: “At the first coming He was wrapped in swaddling clothes in a manger. At the second coming He will be clothed in light as in a garment. In the first coming He endured the cross … in the second coming He will be in glory, escorted by an army of angels. We look then beyond the first coming and await the second.” The earthly liturgy recalls the shadows of the Last Supper and Passover, but more importantly, it serves as an image of the realities of the heavenly Wedding Feast of the Lamb described in the Book of Revelation. The earthly chalice is not only a recall of the cup of the Last Supper, but of the glorious, golden, radiant feast of heaven. Similarly, the church building should show us the order and perfection of heaven.

Building beautiful buildings should never be a substitute for feeding the poor and nursing the sick, but it is not an either/or question. The poor and the sick are also expected to participate in the liturgy, and they deserve access to the foretaste of heavenly reality as much as anyone. A beautiful church gives them a refuge of beauty, which they need more urgently than do the wealthy. Serving the poor means serving their human need for liturgical beauty as well as food and shelter.

Didn’t the early Christians worship in simple private homes? Why, then, should we build elaborate public buildings?

Though scriptural evidence speaks of the earliest Christians “breaking bread” in their homes, it also speaks of them returning frequently to the temple for prayer. A number of the important discourses and cures in the Acts of the Apostles happen within the temple courts. Because Herod was a client-king of the Roman Empire, the temple was a grand, high-style architectural ensemble of the type common in imperial Rome. Christ and the apostles walked on the temple mount amid Corinthian columns, classical moldings, and a large basilican hall called the Royal Stoa, which contained wood carvings and looked almost indistinguishable from early churches in fourth-century Rome. Christianity was not only born into Israel, but also into the Roman Empire, well before the emperor Constantine converted to Christianity and made it the religion of the empire.

But even if Christianity had been born in a cultural vacuum, it would still need to develop an art and architecture that could serve as sacramental bearers of the heavenly Jerusalem. So to revert to building churches as “houses” today is to embrace a false antiquarianism that says “older is always better”. The church building is not primarily a house, but rather a ritually public and sacramental building where the many gather to anticipate the glory and perfection of heaven.

Why did we build so many ugly churches after the Second Vatican Council? Why did we take out the marble high altars from older churches and paint over the murals?

In the early and mid twentieth century, the culture still had a great trust in modernity and its notions of progress. The Church, too, desired to prove that the Faith could find expression in our own day as it had in other times and was particularly eager to be a leaven for the world after the Great Depression, two world wars, the Holocaust, and the use of nuclear weapons. While the Church sought to be an antidote to the destruction of the early twentieth century, many strains of the art world moved toward a nihilistic or mechanistic understanding of technology as the answer to modern problems. In the elite circles of architectural philosophy and practice, the machine and the factory (and their materials of glass, steel and concrete) became the model for new buildings. Though this mechanistic understanding of buildings was often foreign to sacramental theology, building a church that embraced the modern world was often seen as a good by individual pastors and bishops. Only later did people start to see that some of the principles of modernism needed to be rethought for ecclesiastical use. We are now living in that postmodern time when many churches are re-engaging with beauty and tradition once again.

Interestingly, after the Second Vatican Council, a strain of theology emerged in the Church, which redefined churches as meeting-houses and found its inspiration in the so-called house churches of the time of the apostles. Although this sort of uncritical antiquarianism had been widely condemned by Church authorities over the centuries, including Pope Pius XII in Mediator Dei, many Catholic theologians nonetheless argued that a church building had no import other than as a place of comfortable hospitality, a “skin for liturgical action”, which “need not look like anything else past or present.” [as described in Environment and Art in Catholic Worship, a 1978 statement of the liturgy committee of the US bishops’ conference, superseded in 2000 by Built of Living Stones.]

Though highly influential in the late 1970s through the 1990s (and even today in some circles), this is no longer the prevailing notion of church architecture. In fact, the Catechism of the Catholic Church specifically states that churches “are not simply gathering places, but signify and make visible the Church living in this place, the dwelling of God with men reconciled and united in Christ” (CCC 1181). In other words, a church is an image that shows the realities of the heavenly future when God’s reconciliation with humanity is complete.

In the late 1960s and forward, then, many people who accepted this redefinition of the church as a meeting-house for the community’s sacred meal then saw old altars, altarpieces, statues, and murals as relics of the “old” way of understanding the Church. In order to best express the new notion of a church as meeting-house, they removed and destroyed many precious artifacts. Under Pope Benedict, the Church has come to understand better the Second Vatican Council as a call for reform within a “hermeneutic of continuity” rather than rupture, and people are learning to see the value of many traditional forms in the Church once again. However, it should be noted that an uncritical look at the past should be discouraged. There were in fact many reforms that were needed before the Council, and careful theological examination is required in restoring old forms in order to avoid simply repeating preconciliar excesses.

This appeared at Adoremus bulletin.