Is The Altar a Community Table? Good Questions Part 3 of 3 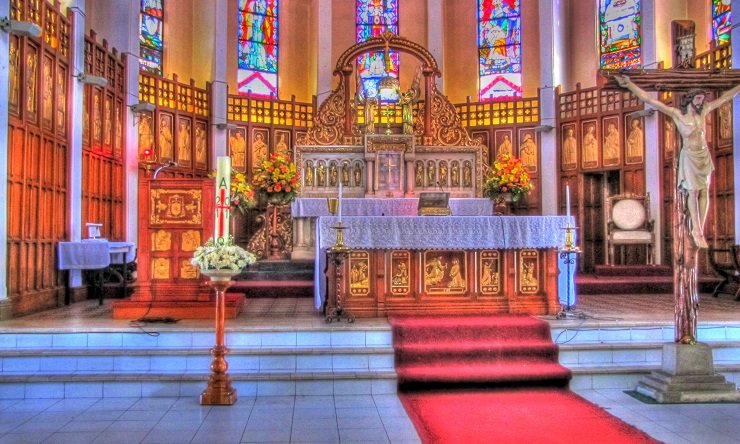 This is the third and final part of a series answering good questions I have faced in giving presentations about beauty and culture in the Church. Part one explained how the church buildings not only shows us our earthly reality, but allow us to glimpse the realities of our destiny at the end of time when God has completely restored the world. Part two asked why Catholic worship is so ornate and suggested that an elevated space for worship has always been part of the Church community, ever since the first Christians spent time in the Temple and the Roman Stoa. Part three, which follows, takes those two steps and gets specific about the constituent parts of Church buildings.

In recent decades, the altar in a Catholic church has usually been described as a “table of the community”. In one sense, this is true. A Catholic altar is indeed the table around which the earthly congregation gathers to worship God. But the altar is also a sacrament, a visible sign of otherwise invisible realities. And the prime reality is this: the altar is the glorified table of our future heavenly banquet as well as a symbol of Christ Himself.

The Book of Revelation tells us that the future holds for us an eternal celebration with God and the heavenly beings when the “rescue mission” of God is complete. God will be “all in all” and His divine presence will completely restore everything. The results of the Fall — death, sorrow, suffering, sin — will be overcome and God will be fully reunited to His creation once again; the two will become one. For this reason, the heavenly celebration is called the “Wedding Feast of the Lamb”. Christ, the Bridegroom, has become one with the Church, His Bride. The heavenly celebration that ensues is not completely unlike the wedding receptions we have on earth, where festivity reigns and we share a banquet eaten on a beautifully decorated table, dressed with linens, candles, and flowers. But the altar signifies a feast of eternal, cosmic, and heavenly importance: Christ’s mission to re-join God and creation is complete! So our worship is a celebration, a doing on earth what is done in heaven. The sacred meal of the liturgy, then, happens on a “table” in a church building, which indicates eternal importance, permanence, radiance, and perfection. We become accustomed to heaven by doing the things of heaven, even while still on earth.

However, the celebration of Mass is also a sacrificial feast. It therefore requires not only a table, but also an altar as a place of offering. The feast is hosted by Christ, whose body is simultaneously the “place” of offering (the altar), the offerer (the priest), and that which is offered (the victim). Christ then is the truest altar. Our earthly altar conversely signifies Christ and gives us the old expression “the altar is Christ”, which is why the priest kisses it as he enters the church. To kiss the altar is to kiss Christ.

As a sacramental sign of Christ, the altar is treated in a way that makes its “Christ-ness” most evident. It is made of stone and is affixed to the floor, signifying the permanence and eternity of the Son of God. It is marked with five small engraved crosses indicating the five wounds of His body. When the altar is dedicated by the bishop, it will again be treated as a body: sprinkled with holy water like a Baptism and rubbed with sacred oils in an anointing, which indicates Christ as “the Anointed One of God”. It is then “dressed” in white linen altar cloths, signifying the white robes of heavenly beings, while at the same time showing that the “table” is prepared for the greatest feast ever celebrated. From this table is served God Himself in the Eucharist.

If the altar is so important, then the lectern shouldn’t detract from it, should it?

The origins of the ambo trace back to the early Church where it was set apart and reserved for the public proclamation of the scriptures and the subsequent preaching on those readings. An ambo, then, is more than a lectern or pulpit; it is something of a sanctuary for the word of God. As such, it is not only functional, but also a sign to those who see it that something important happens within it. Although it dropped out of use in the course of the Church’s history to be replaced primarily by a preaching pulpit in the years before the Second Vatican Council, the proper ambo was revived and the term came back into use. To say ambo is to use the very language of active participation in the public proclamation of scripture that the Second Vatican Council desired.

At the ambo we are spiritually nourished with the revealed word of God, just as at the altar we are nourished par excellence with the Body and Blood of Christ. For that reason, an ambo should exhibit a clear relationship in design and materials with the altar itself.

Isn’t the sacrament of baptism even more important? Shouldn’t the baptistry be givena more prominent place?

In the early centuries of the Church, baptistries were often buildings separate from the main body of a church. Those who were not yet baptized were not yet considered “citizens” of the Church, and as such received their baptisms outside the church, then processed into the church building in triumph. Many such baptistries exist to this day in the great churches of the world. As centuries passed, baptism was often reduced to a sprinkling of water on the head of a child, and fonts began to shrink and lose their architectural significance. In the twentieth century, baptism was understood anew as a sacrament of birth, death, and ritual washing.

The fullness of the sign was seen as better expressed in immersing (immersion) the catechumen in water rather than a mere sprinkling (infusion), and the notion of larger fonts in which adults could walk became popular. In the years after the Second Vatican Council, a greater emphasis was placed on baptism as an entry into the ecclesial community, and so baptistries became more prominent and were often located within the body of the church, sometimes at the rear of the church’s central aisle. While this made baptistries more visible, it made it awkward for funeral and bridal processions. Because many pastors wanted their baptistries to be visible at the Easter Vigil, fonts were then often located in the front of the church.

There is no one correct place to put a baptistry in a church, but the placement should adhere to several principles. First, the location of the baptistry should suggest entering the Church as one receives this Sacrament of Initiation. The recent trend of putting baptistries in the sanctuary behind or next to the altar should by all means be avoided; baptism signifies the entry into the Church, not the final destination. Second, since baptisms in large parishes usually involve many family members and multiple children, giving adequate seating and good sight lines to the baptistry is important, though not essential. Third, since baptism is a preparation for fulfillment in the Eucharist, some connection with the altar is desirable, either in sight lines or materials.

The baptistry is a place of important sacramental activity, so its materials and design should announce that fact. The fiberglass tub baptistries seen in recent years should absolutely be rejected. The octagonal shape of the baptistry connects to a longstanding tradition of symbolizing the “eighth day”, the day after God’s seventh day of creation, signifying the eternal rest of the glorified paradise of heaven. Since baptism provides the entry point to that paradise, the architecture itself should give a foretaste of that glory. But the glory of baptism arises out of the symbolism of the baptistry as “womb and tomb”.

The centralized plan of the baptistry harkens back to the ancient form of tombs, which were often round buildings based on the shape of burial mounds. Baptism provides the entry to new life, but only as a “death” to the old self, where one descends down several steps, as if descending into burial. After the ritual cleansing with baptismal water, the newly baptized person then rises up the steps on the other side, indicating a rebirth as a new creation, out of the tomb, which is simultaneously like coming forth from a mother’s womb, “born again”, in the proper sense of the term.