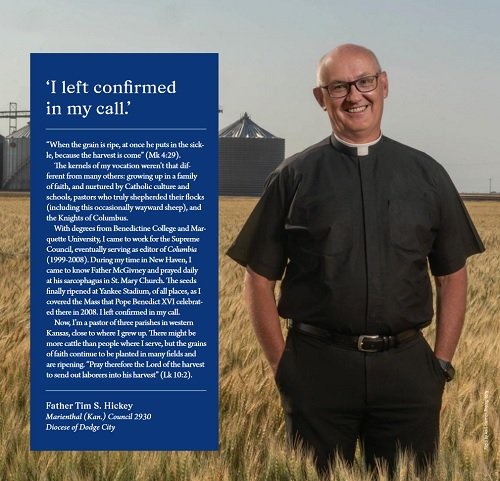 There are two priests featured on the cover of the 100th anniversary issue of the Knights of Columbus magazine, Columbia.

One is obvious —the recently beatified founder of the Knights, Blessed Michael McGivney. But the other is a former English major at Benedictine College in Atchison, Kansas — Father Tim S. Hickey, in Marienthal, Kansas.

The anniversary issue is the fraternal order’s regular July/August issue, and the back page is the vocation spotlight they feature in every issue. Several Benedictine College alumni have been featured in this spot, but this time the priest being featured is an alumnus not just of the college, but of Columbia magazine, as well.

“With degrees from Benedictine College and Marquette,” writes Father Hickey, “I came towork for the Supreme Council, eventually serving as the editor of Columbia.”

He was editor from 199 to 2008, during which time, writes Hickey, “I came to know Father McGiveney and prayed daily at his sarcophagus in St. Mary Church.”

Those visits sprouted the seeds of a vocation that had been growing all his life, he said.

“The kernels of my vocation weren’t that different from many others: growing up in a family of faith, and nurtured by Catholic culture and schools, pastors who truly shepherded their flocks — including the occasionally wayward sheep — and the Knights,” he wrote.

In 2008, “the seeds finally ripened at Yankee Stadium, of all places, as I covered the Mass that Pope Benedict XVI celebrated there,” he wrote. “I left to confirm my call.”

Today, Father Tim Hickey is a pastor of three parishes in western Kansas near his birth home. “There might be more cattle than people where I serve, but the grains of faith continue to be planted in many fields and are ripening,” he said.