Mass of St. Gregory the Great: Snapshot of a Mystery 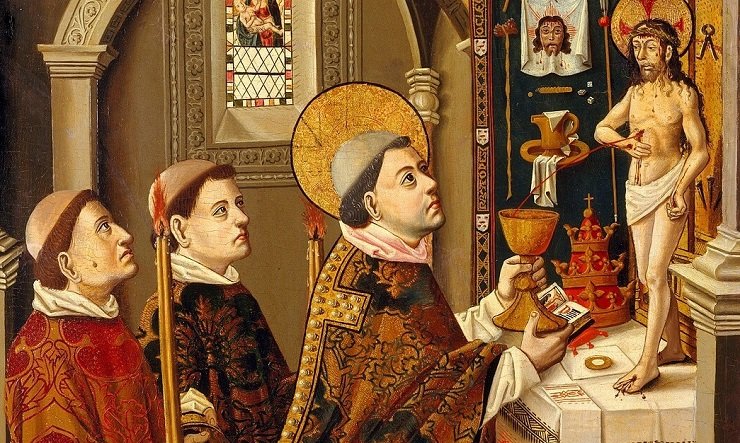 Known for lending his name to Gregorian chant, Pope Gregory the Great, who reigned from 590 to 604 made notable changes and additions to the Roman liturgy, from moving the Our Father to its present place in the Mass to forbidding subdeacons from wearing chasubles. In art, however, he is perhaps best known for being portrayed in a scene where Christ miraculously appears upon an altar at which Gregory is saying Mass.

The pious legend of the event was chronicled by Paul the Deacon, an eighth-century Benedictine monk from the Abbey of Monte Cassino near Rome. In his biography of Pope Gregory, later retold in the 13th-century Golden Legend, Paul relates the story of a “doubting matron” who comes to church bringing bread that she had baked herself to be used for Mass. When she came up to receive Communion, Gregory noticed her smiling incredulously, and upon inquiry, the woman told him that she could not believe that bread she had baked herself could become the Body and Blood of Christ simply through the words of consecration. Hearing this, he prayed urgently that her unbelief might be healed, and suddenly a host changed to the appearance of actual flesh and blood approximating a human finger. Seeing this, the woman’s faith in the Real Presence was restored, and she knelt down, weeping in repentance.

Through the centuries, as the story was told and retold, certain details changed in the visual representation. The small piece of flesh was gradually replaced by the entire body of Christ appearing on the altar, and the doubting matron was replaced by a deacon. Version after version appeared in art through the centuries in paintings, manuscript illuminations, prints and even sculptures, often commissioned by private individuals as devotional images for prayer and contemplation.

In the version shown here, from the collection of New York’s Metropolitan Museum of Art, Gregory is shown celebrating the Mass in a highly detailed liturgical setting. Cruets stand on a small shelf near the altar, the paten with a host sits on a corporal, and an elaborate frontal covers the altar. Resting on a pillow, the missal is open to an image of the crucifixion, indicating that the Eucharistic Prayer is being said, with a large illuminated letter clearly visible. The triple-tiered tiara, indicating Gregory’s identity and rank, rests upon the altar.

Shown wearing a chasuble over a dalmatic, a long-standing custom by this time for bishops celebrating solemn pontifical Masses, Gregory is assisted by a candle-holding deacon and subdeacon who raise his chasuble during the elevation of the chalice. Miraculously, the pope receives the Precious Blood into the chalice from the side of Christ himself standing upon the altar. Although the original story mentions only a small appearance of flesh in the Eucharistic miracle, a scene like this is not intended as much to be historically accurate as a gloss on a larger theological reality: Christ’s real flesh and blood present in the Eucharist is the fruit of his Passion, an offering he chose to memorialize in the form of the sacrificial meal of the Mass. In the background, a prominent stained-glass window of the Virgin and Child reinforces the fleshly reality of Christ, the Word who took flesh in the womb of Mary, just as the human-baked bread of the Eucharist became flesh in the hands of a saintly pope.

Common to nearly all depictions of The Mass of Saint Gregory is the appearance of instruments of the Passion, reinforcing the connection between Christ’s salvific mission and the eucharistic sacrifice. Known as the arma Christi, literally the “weapons of Christ” used to defeat Satan, they often appear rather unceremoniously as disjointed figures upon a rear wall, though in this example the artist worked them into a believable architectural setting. Behind the papal tiara, the implements of the Passion appear on a hanging fabric called a riddel curtain, a common feature of medieval altars. Clearly visible are Veronica’s veil, the spear which pierced Christ’s side on the cross, the hammer used to nail Christ’s hands and feet, a pitcher and cloth used by Pilate to wash his hands of Christ’s death, the Holy Sponge set on a reed used to offer Christ vinegar and gall, and the dice used by the Roman soldiers to cast lots for Christ’s garments.

Behind the standing figure of Jesus appear the cross, the nails of the crucifixion, and the pincers used to remove the nails when Christ’s body was taken down from the Cross. Though they recall the events of sacred history, they also highlight the stubborn reality of Christ’s real, temporal humanity and how divine action in history continues in the sacramental life of the Church.

As a devotional image, The Mass of Saint Gregory serves today much as it always has. It gives the viewer a delightful encounter with Christ’s own pedagogy of salvation. His earthly Passion, which is a real historical event, did not simply end in the year 33 AD. Through the institution of the Church and its hierarchical structure, Christ’s mission continues. In most worshippers’ experience, Christ’s Presence remains veiled under the appearance of bread and wine. Though they sometimes happen, Eucharistic miracles are rare because they arise in times of special need and under special circumstances. The Mass of Saint Gregory reminds the Christian that God still acts in history, both in the hands of the saintliest pope or the most humble parish priest, making his flesh into bread for the life of the world.