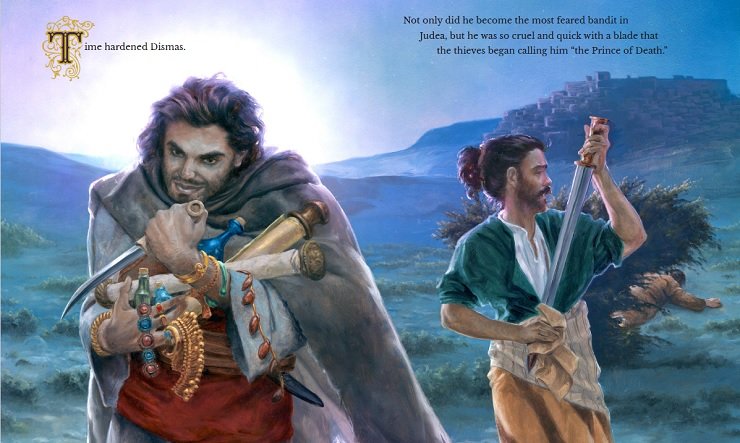 Think of it as Chosen for kids.

I had my doubts when Sophia Institute Press asked me to preview the new children’s book by Raymond Arroyo, available for pre-order before its March 9 release date.

One pitfall in the Chosen series and in other treatments of biblical stories, such as the old television miniseries Jesus of Nazareth, is that those stories tend to give us a specific impression about biblical characters that doesn’t come from the Bible.

But at their best, these stories remind us that these saints are not otherworldly beings but flesh and blood men and women. That is what happens in Arroyo’s The Thief Who Stole Heaven.

Arroyo told me that a single thought launched his newest project “before all the saints, popes, even the Blessed Mother, it is a thief who first breaks through the gates of heaven.”

The story is based on ancient tales he discovered about “Dismas,” one of the two thieves crucified on either side of Jesus.

“I have always loved origin stories and this is an origin story,” Arroyo said.

The book tells the story of two thieves, Gestas and Dismas, who encounter the holy family on the road to Egypt — and then encounter Mary and Jesus again on Calvary.

“When I started doing my research into the Good Thief I discovered a lot of historic material from Augustine, Peter Damien, Gregory the Great and others discussing the backstory of Dismas. I was stunned that I had never heard any of this before and thought it might make a great picture book. I think I was right.”

The Thief Who Stole Heaven begins like Disney’s Aladdin, with a young thief surviving in the shadows of the ancient world with his boss — only it doesn’t make the thief into a Robin Hood, but a true sinner, praised for being merciless. After all, as Arroyo points out, St. Gregory the Great said Dismas is “guilty of blood, even his brother’s blood.”

“For younger readers there is a gripping story of a child who becomes a swashbuckling criminal and encounters grace when he least expects it. For adults this is a redemptive tale and a reminder that hope and mercy endure to the very end. The illustrations invite all ages in and help extend the story’s reach.”

Like Ben Hur, a long story that culminates on Good Friday, it shows how Christ’s act forgives, unites, and heals not just humanity in general but specific human beings in particular.

Ultimately, though, interest in the backstories of Scripture needs to lead to interest in the stories of Scripture.
Hopefully when children who know Arroyo’s story hear one thief say to the other on Calvary, “We have been condemned justly, for the sentence we received corresponds to our crimes, but this man has done nothing criminal,” they will be prepared to understand the sentiment thoroughly, and possibly even apply it to themselves.

Dismas says, “Jesus, remember me when you come into your kingdom.”

Jesus responds, “Amen, I say to you, today you will be with me in Paradise” at which point Dismas’ ultimate theft — “stealing” heaven — is accomplished.

“To such faith, what can be added?” St. Augustine asked. “I know not, for in truth, Christ hath not found so great a faith in Israel — nay, nor in the whole world.”