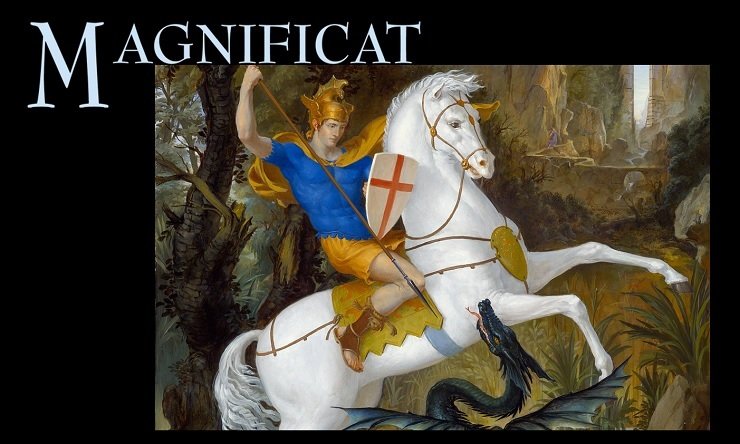 Though very little is certain about the actual life of Saint George (who the Church celebrates on April 23), his legend is dramatic: a noble soldier saves the life of a princess by slaying a bloodthirsty dragon while simultaneously freeing a town’s inhabitants from its tyrannical demands.

But beneath the romantic tale lies the story of a saint, not merely the gallantry of a quixotic hero. As a soldier who faced persecution for his Christian faith, George died at the hands of Roman authorities in the early fourth century, and his heroic virtue was celebrated by the ancient Church almost immediately, earning him the title megalomartyr, or great martyr, whose suffering and death includes spectacular miracles and conversions.

The story of George’s battle with the dragon came later, becoming widely known in Europe through the 13th-century Golden Legend, a sometimes fanciful set of medieval narratives of saints’ lives. As the story goes, a pestilence-breathing dragon lived in a cave in marshland near the Libyan city of Silene. To keep the monster at bay, the townspeople offered it two sheep each day, but eventually only human sacrifice satisfied its hunger.

On one occasion, the king’s daughter was chosen by lot as the day’s sacrifice. As she was led to the marsh dressed as a bride, George happened to be passing by and, springing into action, slayed the beast.

A new rendition of the story was painted in 2011 by Leonard Porter, a living master inspired by the artistic heritage of the ancient world. Though trained as an abstract expressionist, he now engages the great representational methods and perennial questions that have fascinated Western thinkers for centuries. In particular, he finds inspiration in the intersection of myth and history, especially situations which bond people in a common fate, ideas which feature prominently in the story of Saint George.

Porter’s Saint George and the Dragon is “classical” not only because of its representational method, but also in its engagement with profound themes and establishment of a perfected stillness amidst dramatic activity. The painting portrays the climactic moment of engagement with the dragon, who has just emerged from his cave in a chaotic, swampy landscape. The deadly spear threatens the beast’s neck and the horse rears on its hind legs, its mane and tail filled with nervous energy. The rescued maiden appears on the winding path in the middle ground behind, clinging anxiously to a rocky cliff. Yet all is still, and George’s face shows a determined, heavenly calm, reinforced by his perfected armor where blue indicates the heavens and gold the things of eternal value.

Porter chose to stay true to the saint’s origins, filling the image with details from the life of an ancient soldier. The pose of horse and rider was inspired by a scene from the Hellenistic sarcophagus of Alexander the Great, and the saddle was inspired by a sculpture on the ancient Roman Column of Trajan. George’s footwear shows lions’ faces because ancient Romans used cat skins to line their boots. The design of George’s winged helmet was taken from an ancient Greek vase painting of Perseus, who also slayed a monster and rescued a maiden, giving the viewer a chance to ponder the Christian fulfillment of ancient wisdom.