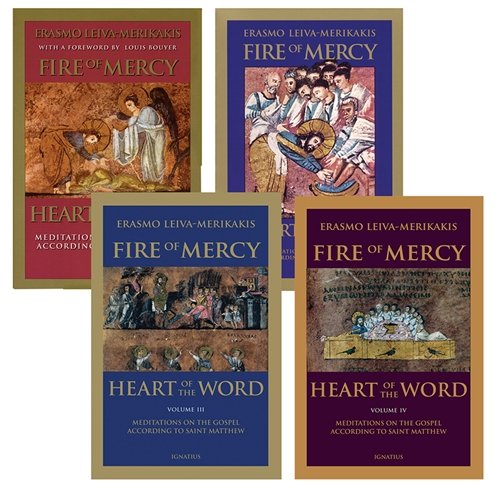 If I could bring one book besides the Bible with me to a desert island for the rest of my life, I would bring Fire of Mercy, Heart of the Word, the four-volume “Meditations on the Gospel According to St. Matthew” by Erasmo Leiva-Merikakis.

In one of those providential events that seem to keep happening, on the feast of St. Matthew, September 21, Father Mike Schmitz’s Bible-in-a-Year Podcast will be reading the Gospel of Matthew — just as, at long last, the fourth and final volume of this masterful commentary on Matthew becomes available.

The praise people have for Fire of Mercy is remarkable.

Popular priest Father Roger Landry calls it “A work not only for our time but for all time.” It “is not like other Scripture commentaries,” says Mother Clare of the Franciscan Friars of the Renewal. “A finer springboard for prayer I have not found.”

It is exactly the deep dive into Scripture that followers of the Bible-in-a Year Podcast should go to next.

Father Mike gives a great tour of the landscape of Matthew’s Gospel, but Dr. Leiva dives down to its depths.

I call him “Dr. Leiva” because that’s how I knew him as a professor and mentor to me in my undergraduate days in San Francisco. It is due to him more than anybody else that I write about the faith to this day. He now goes by the name Father Simeon as a Trappist monk at St. Joseph’s Abbey in Spencer, Massachusetts.

Leiva’s awe and wonder at the Gospel text is infectious.

In a fascinating recent interview with Ignatius Press founder Father Joseph Fessio, Dr. Leiva said the book began simply as a determination to read the New Testament in Greek, starting with Matthew. At the same time a religious convent asked him to do a series of talks. He turned his notes into conferences, and a book project was born.

Leiva reads Scripture as a master translator, not just of words but of concepts. He also brings the richness of his vast reading in literature, spiritual classics and biblical commentary.

Quoting St. Gregory the Great, he told Father Fessio, “The word grows with the reading.”

“The word of God is so rich,” he said, “it’s planted in each one of us, and things come growing out of us that we didn’t even know were in us.”

What has grown out of Dr. Leiva is remarkable.

I never looked at the Beatitudes the same way after reading about them in Volume 1, starting with “Blessed are the poor in spirit.” Taking what the Greek words for “blessed,” “poor” and “spirit” really mean, he re-casts it as: “Fortunate are they who beg for their life’s very breath!”

What Jesus is saying, he explains, is that “We depend on God in the same way that our lungs and our voice depend on air.”

Our deep need for God meets God’s desire for our cooperation when, in Volume II, Leiva looks at the words “He gave the loaves to the disciples” in the feeding of the 5,000. “In whose hands were the loaves in fact ‘multiplied?’” Leiva asks. “Apparently the bread grew in the distribution of it, as a result of both Jesus’ blessing and of the disciples’ collaboration with him.”

Now, in Volume IV, both of those meditations merge.

Dr. Leiva notes that every student of theology asks, “Being wholly without needs, why did God create anything?” and “Why did God create man?” He gives the answer in his account of the Institution of the Eucharist: “because God, being Love, desired in perfect freedom to give himself to what was not God.”

In other words, the Gospel reveals that God longs for the same thing we do: communion.

You see the same dynamic in “the miracle of the text” of the Gospel itself, Leiva told Fessio.

Just as Jesus Christ is the embodiment of the infinite and unknowable Father, “the Gospel text is like an incarnation in paper and human words of the Divine Word,” he said, citing Hans Urs von Balthasar.

“We experience the incarnation of the infinite unseen God in audible, visible, finite human words,” he adds. “It’s so strong, that it knocks us over and it burns us up like fire.”

That’s what reading this remarkable book does for me.