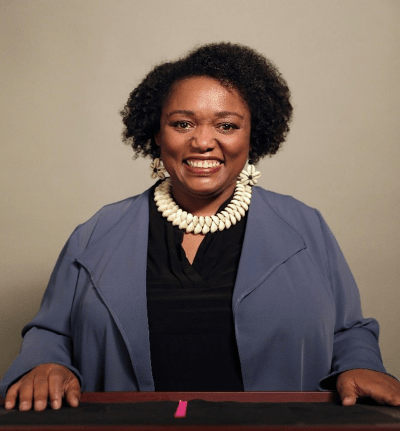 Gloria Purvis is a well-known author, commentator and the host of “The Gloria Purvis Podcast.” The inaugural Pastoral Fellow at the University of Notre Dame’s Office of Life and Human Dignity, she has been a strong advocate for life issues, racial justice and religious liberty. She has appeared in various media outlets including The New York Times, The Washington Post, PBS Newshour, EWTN News Nightly, and Catholic Answers Live and previously hosted “Morning Glory,” an international radio show.
She spoke at Benedictine College in Atchison, Kansas, Oct. 6 in an event sponsored by the Black Student Union, the Gregorian Fellows, Atchison United and the Knights of Peter Claver. Excerpts from her inspiring remarks follow.

The Giver of Life

“I got involved in pro-life work years ago. At the time I had a little nudge from the Lord. I was married. We were attending St. Augustine in Washington, D.C. We got to the part of the creed that says ‘I believe in the Holy Spirit, the Lord, the giver of life.’

“And I can only describe what I had as a very small chastisement. ‘Are you blaspheming? Are you lying? How can you say that you believe in my gift of life when you do nothing to defend life on earth?’

“I fell to my knees. I started to see how many blasphemous communions people were receiving. At that moment I had a deep hunger for the Church’s dignity of the human person.”

“The Lord was inviting me to live witness and testimony to encourage women in crisis pregnancies to have their babies. Here I was outside of abortion clinics praying, helping women have babies, helping women to have hope.”

“I believe in a woman’s right to be born.”

“Jesus said, ‘Girl I carried the cross for me when you were still my enemy.’ I saw it was my role to pray and fast for somebody even if I didn’t like them. As we go through the night and have this discussion, you may say ‘I’m not responsible for that.’ Resist that.”

“Racism is a direct rebellion against God’s word. Genesis says that he made us in his image and likeness. We have a common humanity. We are brothers and sisters of each other. Each one of us has a royal status as a son and daughter of the king. Racism says ‘No. That’s not true.’”

“We know as believers that the effects of a sin can outlive the person who committed the sin. So I am perplexed when people act as if this centuries long practice of evil, this direct rebellion against God’s word, would not be of consequence even until today.”

The Horrors of Slavery

“All of these things are gross rebellions against God’s plan for the human family. But we rarely talk about that. We rarely stop to think about how racism has rend, torn, and broken apart the bonds of the human family.”

“We know religious people held slaves. Religious sisters. I know the Jesuits are coming to terms with that and saying, ‘We need to make repair.’ Martin Luther King said he had not received such viciousness even in the south as he did in the suburb of Chicago. …

“Daily Mass goers, good and faithful Catholics said, ‘You don’t know what it’s like I don’t want my kids around these negroes.’ Back people had to wait to receive our Lord until the white people all received communion. What a sacrilege. What an abuse of what is holy.  We should be disgusted by it.”

“Even in the Church in the United States they would refuse to allow black people to become priests. So you had lay people like black journalist Daniel Rudd go out and evangelize.

“People have a very poor understanding of the contributions of African Americans to this country. Our Sunday Visitor just put out a book about these six African Americans on the path to sainthood: Pierre Toussaint, Henriette DeLille, Father Augustus Tolton, Mother Mary Lange, Julia Greeley, and Sister Thea Bowman “

“Racism conditions us to see blackness and associate it with criminality, promiscuity , less than humanness. ‘They don’t need to have their lives defended.’ That’s what I saw in George Floyd. When push came to shove to actually practice what we preach, we were easily seduced into jettisoning that. We so easily would fall sway to these arguments that say, ‘Your human dignity is conditional.’ That’s not what our church teaches. Whenever there is anything that cuts you off for having empathy for another person’s suffering, something is wrong.”

“If you follow Jesus be prepared to take on the same spitting and buffeting of the faith, and like the apostles and the Acts of the Apostles let us rejoice that we are made to suffer like the Lord.

“We ask women who are in crisis pregnancy to put on the mantle of poverty. What you ask a mother to do you should be willing to do yourself.”

“Why is racism a pro-life issue? Because it is an attack on the dignity of the human person.

“Every night before you go to bed and think about the last four things, ask God to show you the ways in which you have rebelled against his plan for the human person. Beg him for his grace.”