The entire campus community was invited to attend the first regional Gold Mass for Scientists on Nov. 16 at Benedictine College in Atchison, Kansas.

The celebrant was Msgr. Stuart Swetland, president of Donnelly College in Kansas City, Kansas, a Rhode Scholar and physicist who holds an honorary degree from Benedictine College.

This event was sponsored by the new Kansas City-area chapter of the Society of Catholic Scientists and made possible by funds from the John Templeton Foundation. There are only a handful of Gold Mass events in America. The Mass follows in the tradition of special Masses for members of particular professions, such as the White Mass for health care professionals, Blue Mass for law enforcement and Red Mass for lawyers and judges. Gold is the color used in doctoral hoods for scientists. 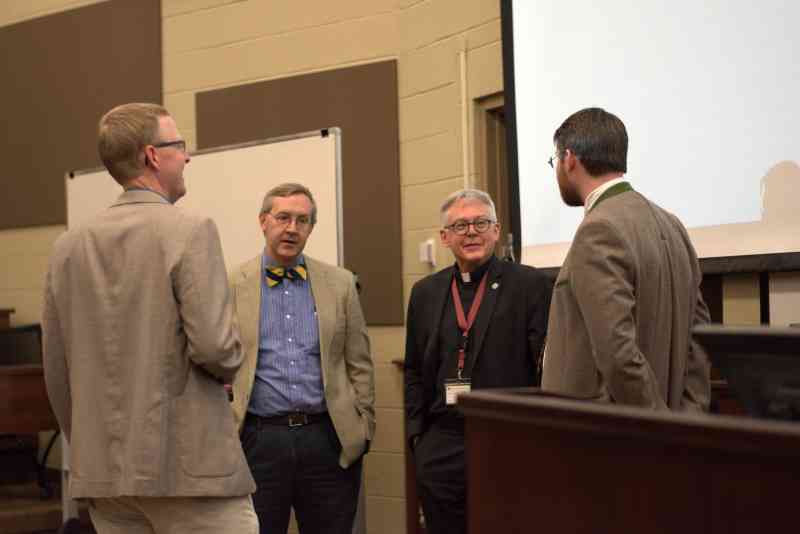 Christopher Shingledecker, an Astronomer at the college, said “The most important point I want students to take away from the Gold Mass is that, as Pope St. John Paul II wrote in Ex Corde Ecclesiae work, ‘carried out in a truly scientific manner and in accord with moral norms, can never truly conflict with faith.’”

“The idea of having this talk was inspired by the tradition of Gold Masses which typically fall on the memorial of St. Albert, patron of scientists, followed by a short lecture to stimulate discussion at a reception where Catholic scientists and those interested in a dialogue of faith and science can engage one another and grow in fraternity,” he said.

In his talk, Ramage said that “while the Church is never going to require that Catholics adopt any well-established scientific conclusion, Aquinas says that error concerning creatures spills over into false opinion about God. We thus want to do our best to get nature right, for it reflects the divine glory and reveals the face of the Creator.”

Shingledecker said he considers events like these more important than ever.

“I also hope that students take away a feeling for the limitations of what kind of questions science can and can’t answer,” he said. “The false attitude that many have is summarized by the title of a recent event involving a Nobel laureate and a popular tv host/physicist, ‘Is Science the Solution to Everything?’ Of course, the answer is an emphatic No, which becomes clear with just a little reflection. Nevertheless, many — including many scientists — assume the answer is Yes.”

We are too quick “to extrapolate the rapid advances of science in the 20th century infinitely far into the future,” Shingledecker said. This creates a “false scientific utopianism” which wonders “Why cannot science improve all aspects of our lives as regularly and reliably as the semi-annual release of a new iPhone?”

He hopes people will remember that “not everything ‘scientific’ is good, and that the results of scientific research can, in truth, more easily result in great harm as great good. I think the pandemic has brought home to many the real potential for disaster or deadly applications of some avenues of scientific research.”

For his part, Ramage said that he thinks the future of science and faith looks “very bright indeed.”

“A decade ago, only infrequently did I encounter other Catholic academics who were dedicated to this dialogue,” he said. “There were notable exceptions, of course, including my former professors Kenneth Howell and Msgr. Stuart Swetland,”

Today, he said, “It is not hard to find wonderful resources that teach the truth of the faith in concert with modern science. For example, my friend Christopher Baglow, head of the Faith and Science imitative at Notre Dame, has a couple of great books on this subject and is about to come out with a new series on it with Word on Fire. Additionally, Stacy Trasancos, herself a scientist, has a nice little book on Catholicism and science. Meanwhile, Dominicans with whom I was just working this weekend in Providence have an outstanding video series on science and faith as well as a great little book called Thomistic Evolution and yet another one coming out next year.”

Benedictine College is known for its commitment to science. The National Catholic Register reported in 2019:

“In the past 10 years, the Atchison, Kansas, college has hired 15 new STEM faculty — more than in any other academic area. STEM majors receive the largest academic scholarships of any majors on campus. The college’s approximate annual investment for STEM fields  in the yearly operating budget is far more than for any other department. And the $25-million recently completed science and engineering building project is the college’s largest capital project ever.”

The paper quoted Benedictine College’s Engineering Chair Darrin Muggli saying, “Instead of teaching engineering, I look at it as ‘I’m teaching this child of God engineering skills.’ It’s a whole different way of interacting with the person in front of you.”

“I would not be the same Catholic I am now if I had not studied in a Catholic environment,” he told the paper. “I want to be a respectable scientist — with research and papers and teaching experience — but to also be a solid witness to the Catholic faith.”

Benedictine College first offered science degrees in 1916, and since then has expanded to offer degrees in Biology, Chemistry, Biochemistry, Physics, Astronomy, Electrical, Mechanical, Civil and Chemical Engineering, and Nursing.

Benedictine College’s new Daglen Observatory is a part of the Vatican Observatory Consortium. Westerman Hall, the 100,000 square foot building which is the finest small-college STEM building in America. The building is dedicated to the harmony of faith and the sciences.

“At Benedictine College, we believe faith, morality and ethics are just as important in the sciences as in every other part of our lives. They cannot be separated,” he said. “One does not have to check their faith at the door of the science building here.”

Biology’s Dr. Martha Carletti agreed. “We are fairly unique among Catholic colleges,” she said. “There are very few who have invested in STEM the way we have. Our faith and our liberal arts background add to our science and math degrees and make our graduates better doctors, nurses, engineers, astronomers, and scientists. Because of our approach, they are better listeners, collaborators and leaders.”