Raven Founder Tells Adoptees: ‘You Are Not Unplanned’

Before she was the founder of a nonprofit, she was just a girl from Peoria, Ill.

But before that, she was an infant in a Russian orphanage.

Annie Fitzgerald’s parents adopted her when she was six months old. Now she is studying theology at Benedictine College in Atchison, Kansas, and is the founder of No Such Thing as Unplanned.

The mission of her organization is “to bring awareness that every single person has purpose and a plan for their lives, regardless of one’s conception or circumstances in life.” The organization is creating a community of adoptees that are able to support each other through their journey of finding self-identity and purpose.

No Such Thing As Unplanned grew out of Fitzgerald’s realization in childhood that she was the result of an unplanned pregnancy, and her attempts to square that reality with God’s plan for married life and God’s plan for her life. She began to realize that God planned every single one of us and we each have a unique mission only we can accomplish.

In high school Fitzgerald began sharing her story, and found that she had a gift for connecting with others. She shared her story more and more, through speaking and writing, and formalized her work as a student at Benedictine College.

Fitzgerald chose Benedictine College because it “just felt like home,” when she visited, she said. Her work is deeply rooted in the college’s mission of community, faith and scholarship.

She said “In the age of abortion and contraception, I think there is a more shared understanding and feelings of being unplanned as there are so many people outside of the adoption community who were also unplanned pregnancies.”

Her organization focuses on those who feel it the most strongly, though: the adopted. 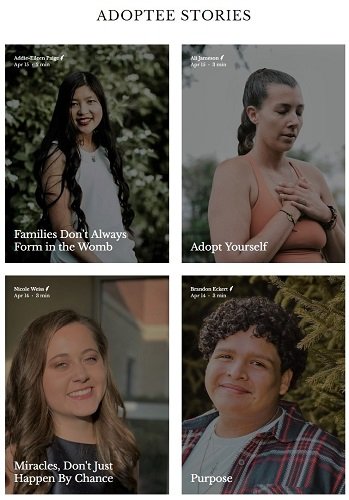 “Adoptees often have the added wound of abandonment or rejection due to their adoption,” Fitzgerald said. “We want to help adoptees work through along with the feelings of being unplanned.”

The college’s mission has deepened her faith life — intellectually and spiritually. “I would have never thought I could learn so much or go so deep in learning about the Catholic faith,” she said. “That learning has changed my life.

She is already planning the next chapter for No Such Thing as Unplanned.

“I hope to be able to continue to grow and expand our community,” she said. “We are constantly adding more educational content, support services, and adding more adoptee testimonials. We hope to reach as many adoptees, adoptive parents, and birth parents as possible.”

She wants to do whatever is best for the organization’s mission, Fitzgerald said. “Ultimately, I am praying through each step and allowing the Lord to guide me in the direction he wants me to take it.

Read testimonials from adoptees at Annie Fitzgerald’s No Such Thing as Unplanned website here.