Raven Stands Up For Women — Against Abortion 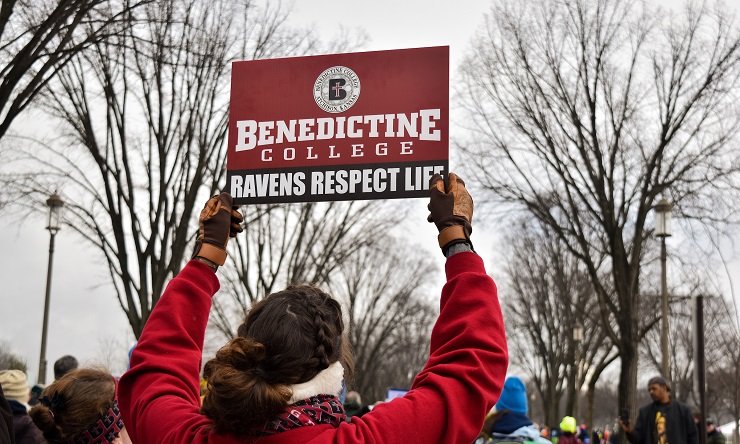 Grace Rembold wants to “deconstruct the myth that abortion is a simple left/right divide.”

Rather, she argues in an opinion piece carried by USA TODAY Network, “it is a human rights issue so fundamental that it supersedes party identification.”

Rembold graduated from Benedictine College this May with a double major in mechanical engineering and philosophy.

After graduation she interned with Feminists Choosing Life of New York in her hometown of Rochester. The experience gave her great formation — and gave her the impetus to write her opinion piece.

“Carol Crossed is the founder of Feminists Choosing Life, and I was able to work side by side with her and a bunch of other great women,” she said.

Along with data entry and manning the phone, she said “I was also able to research and write about a prominent prolife topic. My area was the Hyde Amendment, and after much work and challenging follow-ups with news outlets, my piece was published.”

Her piece, “Destroying the Hyde Amendment could spell disaster for women,” marshals evidence for why the faithful of both parties should, and often do, oppose taxpayer funding for abortion.

First, she describes how the Hyde amendment which prohibits taxpayer funding of elective abortions, “has been an annual budget rider since its introduction in 1976 under President Jimmy Carter, the Democratic president who signed it into law.”

Though President Joe Biden rescinded its protections, “The majority of Americans and many Democrats are in favor of the amendment,” she writes. Rembold quotes the president of Democrats for Life of America saying, “contrary to popular opinion, it’s not just conservative evangelicals who oppose taxpayer-funded abortion. One of us is a Catholic liberal. The other? An atheist. At least 20 million Democrats in this country identify as pro-life, as do six million non-religious Americans.”

Rembold reports that “more than 100 Democratic politicians have spoken against their party’s radical position on abortion in a letter published to the New York Times.”

Calling abortion “a tool of discrimination” she quotes late Supreme Court Justice Ruth Bader Ginsburg, admitting that a critical reason for supporting federally funded abortions was to limit the “growth in populations that we don’t want to have too many of.”

Rembold, references research that shows women who get an abortion are more likely to suffer depression, anxiety and suicidal ideation, and asks: “The mental health impact of abortion speaks for itself and [raises] the question: How can abortion be pro-woman if it causes so much pain?”

She points out that 6 in 10 women support the Hyde Amendment and that “non-white people and low-income people are more likely to oppose federally funded abortions.”

Rembold closes by calling the high priority given to promoting abortion “glaringly misogynist.”

Women, she says, “should be fighting against the myth that our worth is contingent on a violent medical procedure.”

This summer Rembold proved her commitment to authentic advocacy for women. She worked with the Feminists Choosing Life hotline poster campaign, and distributed a hotline number for sex trafficking and domestic violence around New York.

“Benedictine College is really proud of Grace and her incredible witness,” said President Minnis. “Students like Grace will Transform Culture in America.”