Katie Reynolds Scott wasn’t at the game when Benedictine College’s Raven Women’s Soccer beat William Penn University — but you couldn’t miss her if you were there.

Before the game, the Raven Women’s Soccer team’s Katie Reynolds Teammate of the Year picked two players to place flowers at the foot of the campus’s statue of St. Thérèse, just as they do at every home game at the Atchison, Kansas, campus.

The flowers were placed there to honor Katie, and when the clock wound down to 29 minutes, the Ravens cheered, because Katie’s number was 29.

This time, the game included one more honor for Katie. At the end of the game, the women’s soccer team held yellow roses on the field and looked north to where a small group gathered on the hill on the other side of the fence.

It was the Reynolds family, along with Benedictine College President Stephen D. Minnis and other well wishers, gathering to dedicate the statue of St. Thérèse of Lisieux, a ceremony delayed by the COVID-19 pandemic.

President Minnis told the crowd about Katie Reynolds, who married just after graduating college in 2011 to become Katie Reynolds Scott.

“She was enthusiastic, genuine, and always had a smile on her face. She just made you feel good. Katie really was larger than life. Everyone loved her and wanted to be around her,” he said.

After college, he added, “she stayed on here at Benedictine as an Admission Counselor. After a few years, she headed off on the great adventure of life, getting married and beginning her new career as a recruiting specialist at Cerner Corporation.”

Raven Women’s Soccer coach Lincoln Roblee told the crowd about his first meeting with Katie as a high school senior. She walked into his office with a big smile on her face and her parents in tow.

“I was in mid-sentence after just offering her a soccer scholarship,” he said. “Katie excitedly responded with ‘I’ll take it…I’ll take it!’”

Roblee remembers her father trying to slow her down, saying, “Katie, this is an important decision ….”

Katie cut him off. “This is where I want to be!” she said.

Since there were already Kates, Katherines and Katies on the team, Reynolds got her own nickname.

“K-Rey would help us win many games, was a part of our first National Tournament team in 2008, and was known for her team-first approach, joyful laugh, optimism, and prankster attitude. K-Rey loved to work hard but was always having fun,” he said. “She was the ultimate teammate and a joy to coach.”

Katie supported the team as an alumna, too. “As a former player, she knew that team togetherness was important, so she put a few hundred dollars on a Dairy Queen Card, sent it to me and said to go buy the team some ice cream. She was always thinking of others,” said Roblee. 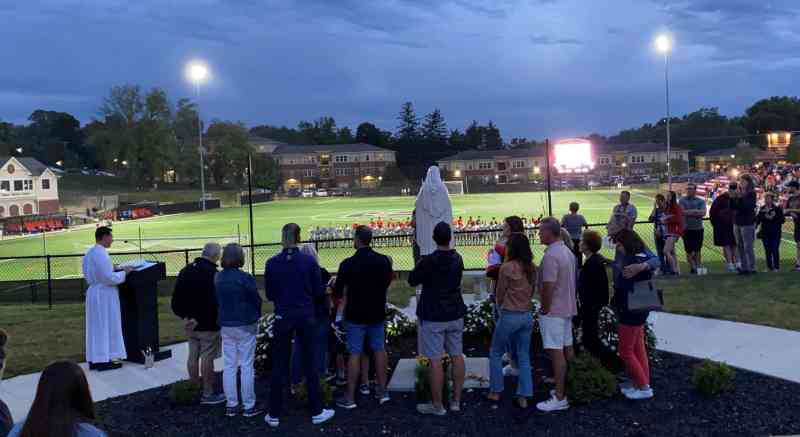 Katie loved and shared her Catholic faith — including a mission trip to Central America.

At the dedication, Gracie Eckardt, Benedictine College class of 2022 from Yutan, Neb., the current Katie Reynolds Teammate of the Year, described Katie’s devotion to St. Thérèse. The saint knew the “secret” and “science” of love, she said. “She died saying ‘Love alone matters.’  Her secret is generally called the Little Way and is so known by the Catholic world.

“She called it little because it partakes of the simplicity of a child, a very little child in its attitude of abandonment, of acceptance,” Eckardt said. “K-Rey rejoices in the Little Way and reiterates ‘Love alone matters.’”

Father Ryan Richardson blessed the statue and the crowd and Mark Reynolds addressed the group on behalf of the Katie’s family, thanking everyone for remembering their daughter. His family has given statues to each place Katie played soccer, including Holy Spirit Elementary School and Bishop Miege High School in the Archdiocese of Kansas City, Kansas. The family chose these words of St Thérèse to be inscribed on the statue:

“Miss no single opportunity of making some small sacrifice, here by a smiling look, there by a kindly word; always doing the smallest right and doing it all for love.”

Every day, the great saint seems to stand guard by the field, reminding students to love the way Katie did.