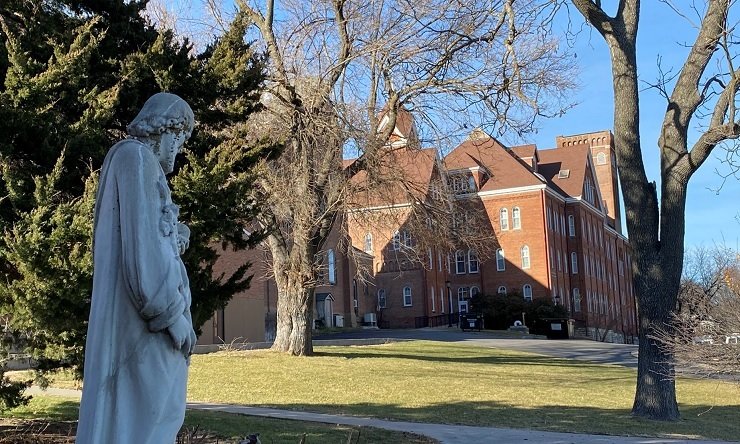 My favorite book of the moment is Atomic Habits, the huge-selling book by James Clear. I have bought it for several of my children because it is a great method of taking small, satisfying steps toward self-discipline. Its tagline: “Tiny Changes, Remarkable Results.”

The book was recommended by a monk, and since I happened to read the book as the Year of Joseph began, it gave me new insight into how Joseph was able to fulfill his vocation not by giant, unprecedented acts but by repeating ordinary virtues. Call it “the Little Way of St. Joseph.”

First, habits form your identity through many “little fiats” like Joseph’s.

“Every action you take is a vote for the type of person you wish to become,” writes Clear. “No single instance will transform your beliefs, but as the votes build up, so does the evidence of your new identity.”

St. John Paul II said the same thing in his often repeated phrase, “Become who you are.” We don’t need an overhaul; we need a quiet commitment to the person God made us to be.

This is also the whole point of Francis’s apostolic letter on Joseph, which names his deepest identity in its title: “A Father’s Heart.” Joseph did not gain that heart all at once, but “in every situation, Joseph declared his own ‘fiat,’ like those of Mary at the Annunciation and Jesus in the Garden of Gethsemane.”

We all need to make little “fiats” continually, says Pope Francis. “How many fathers, mothers, grandparents and teachers are showing our children, in small everyday ways, how to accept and deal with a crisis by adjusting their routines, looking ahead and encouraging the practice of prayer.”

Second, have the “creative courage” to face new situations.

“Over the long run, however, the real reason you fail to stick with habits is that your self-image gets in the way,” writes Clear. “This is why you can’t get too attached to one version of your identity. Progress requires unlearning … to upgrade and expand your identity.”

Imagine if St. Joseph was attached to his identity as a Nazareth carpenter. He may never have been able to be the other things his family needed him to be: a protector, traveler and teacher.

As Pope Francis put it: “The Gospel does not tell us how long Mary, Joseph and the child remained in Egypt. Yet they certainly needed to eat, to find a home and employment. It does not take much imagination to fill in those details. The Holy Family had to face concrete problems” and adapt.

For us, “In the face of difficulty, we can either give up and walk away, or somehow engage with it. At times, difficulties bring out resources we did not even think we had.”

“The greatest threat to success is not failure but boredom,” writes Clear. “We get bored with habits because they stop delighting us … we start derailing our progress to seek novelty.”

Pope Francis’ letter celebrates all those “ordinary people, people often overlooked. People who do not appear in newspaper and magazine headlines, or on the latest television show, yet in these very days are surely shaping the decisive events of our history.” In addition to medical personnel who served in the pandemic, he mentioned “storekeepers and supermarket workers, cleaning personnel,” and many others.

“How many people daily exercise patience and offer hope, taking care to spread not panic, but shared responsibility,” he said. “Saint Joseph reminds us that those who appear hidden or in the shadows can play an incomparable role in the history of salvation.”

Fourth, avoiding temptation is a huge part of the battle.

“When scientists analyze people who appear to have tremendous self-control, it turns out those individuals aren’t all that different from those who are struggling,” writes Clear. “Instead, ‘disciplined’ people are better at structuring their lives in a way that does not require heroic willpower and self-control. In other words, they spend less time in tempting situations.”

Here is another place where Joseph shines. We often get into difficulty in life because we don’t fully commit to the way we know is best. We harbor resentments and look to our pet sins to comfort us.

“Joseph set aside his own ideas in order to accept the course of events and, mysterious as they seemed, to embrace them, take responsibility for them and make them part of his own history,” writes Pope Francis. He rejected “disappointment and rebellion” and unless we do the same thing, “we will be unable to take a single step forward, for we will always remain hostage to our expectations and the disappointments that follow.”