This Sunday, Victory Only Comes in the Jaws of Defeat 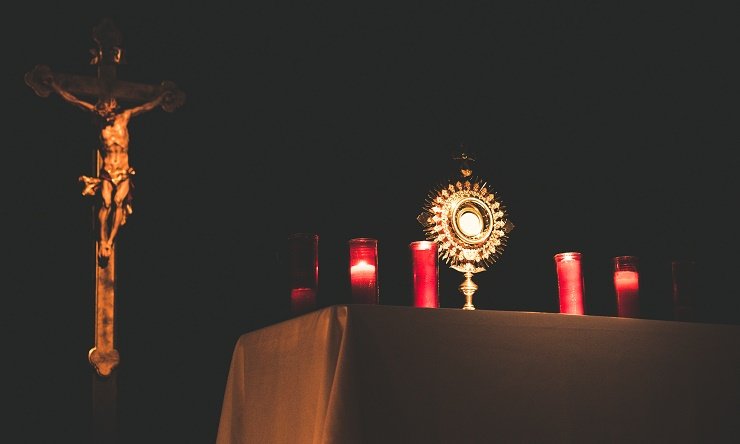 Jesus gives us a key principle in the Gospel this Sunday, the Fifth Sunday of Lent, Year B, that we weak Western members of the Church of the 21st century need to hear:

These words tell us how God’s kingdom always comes, and they have shown the way forward for a Church which from its earliest days has always been on the verge of collapse and on the cusp of victory.

The Gospel of John gives us a great gift: Jesus describing to Gentiles what his crucifixion means.

“The hour has come for the Son of Man to be glorified,” he says when he hears Greeks have come to see him. Then he compares his death not to the sacrifice of the Passover Lamb but to the sowing of a grain of wheat.

He doesn’t say he is dying in our place, or satisfying the needs of justice, as true as that may be. Instead, he says that only by putting the Father’s will above everything, even self-preservation, can his victory be won.

But while the way of self-denial and self-sacrifice is extremely fruitful, it is also extremely difficult, even for Jesus.

In the Second Reading, from Hebrews, Jesus’s mindset before the crucifixion is described this way: “In the days when Jesus Christ was in the flesh, he offered prayers and supplications with loud cries and tears to the one who was able to save him from death, and he was heard because of his reverence.”

We see a glimpse of his pain in the Gospel when Jesus says, “I am troubled now. Yet what should I say? ‘Father, save me from this hour’? But it was for that purpose that I came to this hour.”

If this total self-gift is hard for Jesus Christ, imagine how hard it is for us. But the readings describe two ways to move forward through pain.

First, Jesus turns his whole attention on the Father, saying, “Father, glorify your name.” the Father answers by saying, in a voice like thunder: “I have glorified it and will glorify it again.”

Jesus explains, “This voice did not come for my sake but for yours.” That is the first way to walk through the pain of self-sacrifice: Do it to hasten the time that that the Father’s name will be “hallowed” and his “kingdom come” and “will be done, on earth as it is in heaven.”

The First Reading gives a second way we can embrace self-sacrifice.

“I will make a new covenant with the house of Israel,” says the Lord through the prophet Jeremiah. “I will place my law within them and write it upon their hearts; I will be their God and they shall be my people.”

This is the only place in the Old Testament (which means “old covenant”) in which the new covenant (“New Testament”) is mentioned, and in fact this passage is quoted at length in Hebrews.

Elsewhere in the New Testament the “new covenant” is always mentioned in relation to the Eucharist.

So this is the second way to embrace self-sacrifice: The sacrifice we make is not ours alone; it is the sacrifice of Christ, the grain of wheat who died and become became the Bread of Life, in us.

In the Psalm at Sunday Mass, we ask for a new heart, for perseverance, and for the Holy Spirit’s presence. “A clean heart create for me, O God, and a steadfast spirit renew within me.” God answers this prayer with Baptism and confirmation, which fill us with the Holy Spirit, and in the Eucharist, which unites us with Jesus Christ, and reconfigures us from within.

We can see what this has meant throughout the history of the Church.

After the head of our Church was tortured, killed, and rose from the dead, you see that same pattern repeat. The most dire examples seem to have come every 500 years or so.

In the first 500 years of the Church, Christians faced fierce persecutions — and the Church rose to prominence despite them. In the next 500 years, we saw the fall of the Roman Empire at the end of the fifth century threaten the Rome-based Church — but also the rise of St. Benedict (480-547) and his monastic system of Abbeys, which brought education, commerce, theology and philosophy to Europe. The next 500 years saw the Great Schism (1054) tear the Church in two — but also the rise of scholasticism and St. Thomas Aquinas placing Christianity on a new intellectual footing.

Then, roughly 500 years later came the Reformation (1517) and the Church which had already been torn in two got shredded. But then came the apparition of our Lady of Guadalupe in Mexico (1531) and the Christianization of new continents.

Now, 500 years later, in the 2000s, aggressive secularism seems to be overtaking many in the Church, from Germany to New York. But at the same time you have the rise of Christianity in Africa, India and China, and in the West, the Church taking up the weapon that has been underused so far: the laity.

Will another victory follow apparent defeat? Absolutely it will. But only if we embrace the principle of the grain of wheat.

Author George Friedman says the 2020s will be an ideological Storm Before the Calm bringing “America’s Discord, the Coming Crisis of the 2020s, and the Triumph Beyond.” The 2020s will be like a new 1960s, seeing big ideas clash and a new understanding develop.

He doesn’t mention us, but if he’s right, Catholics will have to decide who we are in the conflagration ahead: Are we in the image of our self-described “devout Catholic” president who actively promotes the abortion industry, which destroys human life for profit? Will we reject marriage as a God-given institution that protects and preserve those couples who naturally produce children, or will we continue to change marriage to be merely a declaration of sexual love? Will we follow the Bible and chromosomal science which say we are created male or female, or will we override faith and science with ideology?

If we were able to politely avoid these topics before, that will be impossible in the coming storm. Instead, we will be called upon to put ourselves on the line for the truth: Our reputations if not our bodies; our livelihoods if not our lives.

The Church will once again pry victory from the jaws of defeat — but only if we throw ourselves into those jaws, like Jesus did. As he puts it at the end of Sunday’s Gospel:

“Now is the time of judgment on this world; now the ruler of this world will be driven out. And when I am lifted up from the earth, I will draw everyone to myself.”