What’s it like knocking on doors to urge voters to protect the right to life?

That is what EWTN News In Depth host Montse Alvarado asked in the program’s July 15 episode exploring Catholics’ work on the Value Them Both Amendment in Kansas. The international cable news channel also posted a longer form interview in a YouTube video featuring two freshman from Benedictine College in Atchison, Kansas. (Click here for the inspirational Raven door-knocker covered by The Washington Post and Reuters.)

With the Aug. 2 vote date quickly approaching, this is a pivotal time for Kansas pro-life advocates to mobilize citizens to vote Yes on the Value Them Both amendment (click here for “Kansas Countdown: Steps to Take RIght Now to Save Countless Unborn Lives.”) 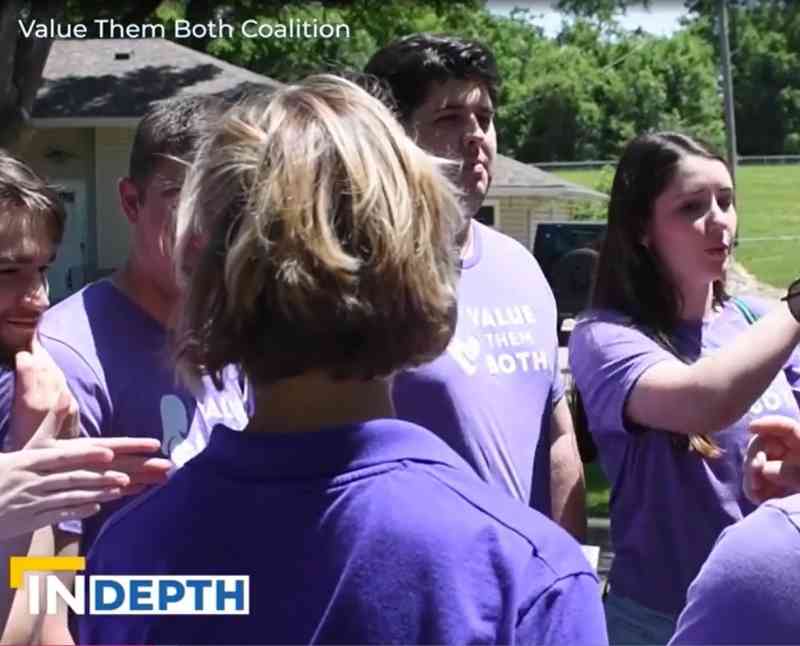 After the Supreme Court’s Dobbs decision overturned Roe v. Wade, this is “the eyes of the nation will really be upon Kansas in this and it will affect other states,” Kansas City-Kansas Archbishop Joseph Naumann told EWTN.

The amendment would clarify that “the constitution of the state of Kansas does not require government funding of abortion and does not create or secure a right to abortion. … [E]lected state representatives and state senators, may pass laws regarding abortion.” Vincent Schiffiano, who led Benedictine College student efforts that were pivotal in putting the amendment on the ballot, appears in the EWTN coverage (right).

The EWTN report featured incoming students Hannah Joerger and Mara Loughman. Alvarado, the show’s host, is a member of the board of directors at Benedictine College.

Hannah Joerger and Mara Loughman (pictured above), will be attending Benedictine College in the fall. Joerger and Loughman have been working with the Value Them Both campaign throughout this summer to educate Kansas citizens on the amendment. Read what they had to say in the interview:

“I’ve been pro-life my entire life, and it’s really important to me to not only be pro-life but to do something about it,” Joerger told EWTN. “Something amazing is being able to door-knock or make phone calls, as well as pray, which is the most important.”

Loughman agreed. “It’s really important for our generation who’s able to get out and door-knock,” she said. “The older generation can’t quite do it and they always thank us for the work that we do while they do the behind the scenes work for us.”

The amendment would reverse the Kansas Supreme Court’s 2019 ruling that claimed that the Kansas constitution protects a woman’s “right” to abortion. Currently, state lawmakers are essentially prohibited from passing any type of abortion restriction. The amendment, if approved by voters, would enable state lawmakers to pass legislation to regulate or restrict abortion.

Both said that their friends are split on the question.

“A lot of my close friends are in support of me doing this, and I do have some friends who have differing beliefs,” Loughman said. “They’ve been very respectful about it. It’s just very important to be very open to listening to each other’s differing opinions.”

Her faith has made the difference for her, she said.

“I think God put me on this path and took different opportunities out of my way so that this was the one that I was on to really get my voice out there for those who don’t quite have that opportunity to be as outspoken as we are,” she said.

The work has born fruit already.

Joerger described one woman who told her that she thought women had the right to abortion. “I was explaining this amendment and how it does not ban abortion and she was very respectful, and she listened and she was like ‘You know what, I agree with the existing limits in the Kansas Constitution.’ And so, she decided to vote Yes, whereas before I was talking to her, she was already set on voting No. It was really cool kind of seeing a change in her to be voting Yes for this amendment.”

Loughman met a woman whose personal experience fueled her pro-life convictions. She “was pregnant at 17 before Roe v. Wade had happened, so she had to have her child,” Loughman said. Now, she “was celebrating his 55th birthday and she was more than thankful to have the opportunity to have this child and to be able to celebrate that birthday with him.”

They do meet resistance, too. “I’ve had some people yell at me, and you just kind of got to keep positive and keep on moving because of course you’ll have those interactions — this is a very heated topic,” said Joerger. But she keeps positive and “like what Mara was saying, having those positive interactions are really uplifting.”

Both students said they have high hopes for the future.

“We’ve been working really hard for this. There’s been a lot of support and prayers coming in, and I’m really confident that this amendment will pass,” Joerger said.

Watch the full July 15 episode at EWTN or see the interview below for more about how Catholics are supporting the amendment. For more information on the amendment and to get involved with the campaign before August 2 visit the Value Them Both website.