For its 12th dorm to open in the 21st century, Benedictine College performed a ceremony that it has been doing since the 19th century.

Responding to record enrollment, Benedictine College is busy building the next residence hall for the campus, St. Gabriel Hall.  Set to open next year, the hall is next door to St. Michael Hall, creating “Archangel Row” on the northern end of campus. 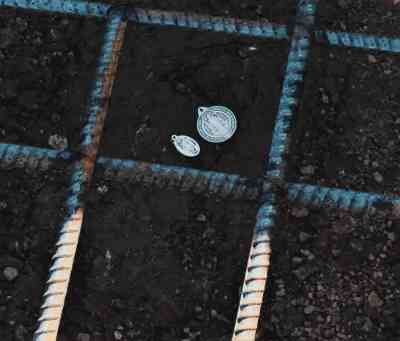 This new residence hall is named for St. Gabriel the Archangel, who announced to the Virgin Mary that she had been chosen to be the Mother of God.

“Gabriel appears several times in the New Testament, as well as in the Old Testament,” said Benedictine President Stephen D. Minnis during the ceremony. “And he is usually represented carrying a lily and often has a scroll, on which is written the words from St. Luke’s Gospel with which he greeted Mary.”

The medal ceremony itself is a practice that dates back to the 1800s and the construction of some of the original campus buildings, Bishop Fink Hall and Elizabeth Hall, which is the original abbey. Both of those buildings, along with every other building on campus, has a blessed St. Benedict Medal in its foundation.

“This tradition relates to St. Benedict’s ability to sense danger and ward off evil during his lifetime,” Minnis said. “It is meant to protect the students and staff once they begin using the facility.”

When Benedictine College built Mary’s Grotto to commemorate the 160th anniversary of the campus in 2009, Lourdes water was brought in from France to mix the concrete with. Monks embedded a St. Benedict medal along with a rosary blessed by Pope Benedict XVI in the foundation.

Abbot James Albers consecrated the college to Our Lady in 2013, and the consecration was renewed in 2018. To commemorate the occasion, 1,000 faculty, staff, students, and friends formed a giant living rosary around the campus. After praying the Rosary together, students dropped hundreds of blessed Miraculous Medals into pre-drilled holes in the sidewalk. Afterward, the holes were plugged up with concrete and stamped with symbols to mark a giant walking rosary — Roman numerals to begin each decade and an M for each Hail Mary.

Fr. Luke Turner, OSB, performed the blessing of St. Gabriel and students with names derived from Gabriel were invited to place the medals in the foundation.

“We have truly been experiencing a renaissance on our campus and this new residence hall is a sign of our continued growth and success,” Minnis said.