Film Review: Mark Wahlberg Is Powerful as Father Stu, But Something Is Missing …

Last week, the students, faculty and staff of Benedictine College were treated to an advance screening of Mark Wahlberg’s latest film, Father Stu, which opens on Holy Wednesday, April 13. In the film, Wahlberg stars as real life priest, Father Stuart Long, who found himself on the road to priesthood after a lifetime of false starts, wrong turns, and dead ends — not to mention a nearly fatal motorcycle accident. Mel Gibson co-stars as his father.

Father Long had a no-nonsense approach to evangelization, and the film doubles down on this tactic. A faith-based film with a foul mouth, Father Stu could easily run on a double-feature with The Blind Side, if not for that R-Rating. This welcome contradiction is born out of two earnest desires. The first is to entertain. Father Stu is more of an old fashioned comedy than a message movie. At the center is a charming, fully realized character, who desperately wants to find his place in the world. The film’s ultimate desire is to show his transformation from a guy without a clue, to a man with all the answers.

Father Stu is a passion project for Wahlberg in more ways than one. He put himself through a harrowing bodily transformation to portray Father Long’s battle with Inclusion Body Myositis, the disease which threatened to derail his calling, and which ultimately claimed his life in 2014, at the age of 50.

Behind the scenes, Wahlberg has been with the project from day one, believing so firmly in the power of Father Long’s story that he financed the film himself — an extreme move, more shocking in Hollywood than gaining 30 pounds in 30 days. By all accounts, these uncompromising choices were fueled by Wahlberg’s sincere desire to share the impact of his Catholic faith. For counsel on this massive financial undertaking, he turned to his co-star, Mel Gibson, who gives a wonderful tragic-comic performance as Stu’s father, Bill Long. Gibson took a similar financial gamble on The Passion of the Christ, and ended up making one of the most successful independent films of all time.

I believe that if Father Stu strikes a similar chord, it will be thanks to Mark Wahlberg’s central performance.

Mark Wahlberg is a revelation as Fr. Stuart Long. He’s always been a charismatic actor, but after 10 years of watching him play the same scowling tough guy, it’s great to see him flex those acting muscles again.  Stu is a tough guy to be sure. A boxer, a brawler, and a sinner. But what sets him apart is a profound innocence. This man is the textbook example of, “Father, forgive them, for they know not what they do.” They say God draws straight with crooked lines, and so it was with Stuart Long.  The wild trajectory of his life allows Wahlberg to exhibit an impressive emotional range.

When Stu tells his mother he’s going to Hollywood — one of his many harebrained schemes — there’s a childish gleam in his eye, and a vulnerability that Wahlberg hasn’t shown us since his performances in the late ’90s. Later on, when he tells her with the same smile that he’s going to be a priest, we can see that something has changed. A light has been switched on. And when it seems like that light is about to be snuffed out, the sense of rejection that Wahlberg conveys, praying alone in a darkened chapel, seems to come from a real place of anger and fear.

To date, the most comprehensive biography of Father Stuart Long can be found in his obituary posted by the California Catholic Daily, which seems to be largely based on his interview with the Diocese of Helena. Of course, Father Stu, is only a version of real-life events, but writer-director Rosalind Ross does an admirable job of streamlining his life into a halfway coherent narrative. The character as written is more of a ne’er-do-well knucklehead than the man who received a bachelor’s degree in English Literature, managed a museum for seven years, taught Catholic school while discerning the priesthood, and later earned a Master’s degree in philosophy. This change, I feel, is totally legitimate as a dramatic choice. By removing any sense of hesitancy or thoughtfulness, Stu becomes a creature of id and impulse, which highlights the hand of divine providence, and underlines the beauty of his steadfast devotion to the priesthood.

What the film loses in translation, however, is any indication that Stu understands the gravity of his vocation.  The film is in such an almighty rush to hear his smack-talkin’ sermons, that it forgets to ask one simple question.  Why does Stu want to be a priest?

No priest makes a positive impact on his life. There’s a parish priest at his girlfriend’s church, but Stu never observes this man’s pastoral duties. While he’s laid up in the hospital, no priest is there to offer the Blessed Sacrament, or the Anointing of the Sick. Wouldn’t this be the perfect moment for Stu to identify with a servant of God, who has come to cleanse his soul?

As a priest, Stu’s primary role would be to prepare his flock for heaven through the sacraments, which God has given us so that we may participate in His Grace. A priest without sacraments is like a chef without food. It’s unfortunate then that many of the sacraments are conspicuously absent from this story. Baptism and Confession are present because they’re dramatic symbols for conversion and redemption. But they’re stripped of their context as a path toward receiving the Blessed Sacrament, which is the body and blood of Jesus Christ.

As a result, the priesthood is reduced to talking real good about God. And by that measure, Stu is fully formed in his vocation before he’s entered the seminary. On the positive side, his epiphany becomes a catalyst for change in his circle of loved ones.  This allows the supporting cast to set off their own sparks. Mel Gibson and Jackie Weaver are wonderful as Stu’s estranged parents, who have fallen into apathy since the sudden death of Stu’s little brother. Gibson’s final scene with Wahlberg is undeniably moving.

Catholic outlets across the country have been championing support for Father Stu, and it’s not for nothing. This is a good film about an inspiring individual, with a great central performance. There’s a lesson here for young Catholic filmmakers who hope to evangelize through media. If you don’t have a great character, with hopes and ambitions, whose ambitions are challenged in a significant way, then you don’t have a movie. If you have a good performance to back it up, then you’re off to the races. These qualities can overcome any faults that a film may have.

However, if there’s a lesson here for Hollywood, it’s that when portraying the lives of great individuals, the devil, so to speak, is in the detail. Wahlberg and Ross have rounded out the edges of Catholicism for the sake of mass appeal. And fair enough, they want to make sure the inspiring story of Father Stuart Long reaches as many people as possible. But it’s funny that this film, which is so uncompromisingly Christian, hedges its bets when portraying the faith of its central Catholic priest. 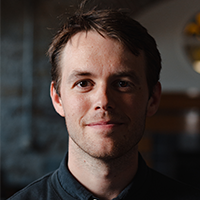 Michael Coy is a Video Specialist for Ex Corde at Benedictine College. He and his wife, Ella, were married in 2021, and they are excited to raise a family in the Catholic faith. Before joining Ex Corde, Michael owned and operated Walking Talking Pictures, LLC, a video production company in Overland Park, KS. He graduated from the University of Kansas in 2014 with a Bachelor's degree in Film & Media Studies.