Bishop Robert Barron is an answer to prayer — a remarkably specific answer to the specific requests of many of us.

I don’t mean to canonize him or endorse everything he has said or done — I personally disagree with plenty of both. But my family and I have been richly blessed by listening to him and learning from him. I write this as he spends the weekend Benedictine College in Atchison, Kansas, as our commencement speaker, honorary doctorate recipient, and inaugural winner of the Excellence in Theology and Art award from our Center for Beauty and Culture, so I have actually gotten to meet the man himself.

He told us about several aspects of his life and I’m fascinated by the way his story shows how God answers prayers through the long interplay of circumstances and a soul’s free response. Consider: 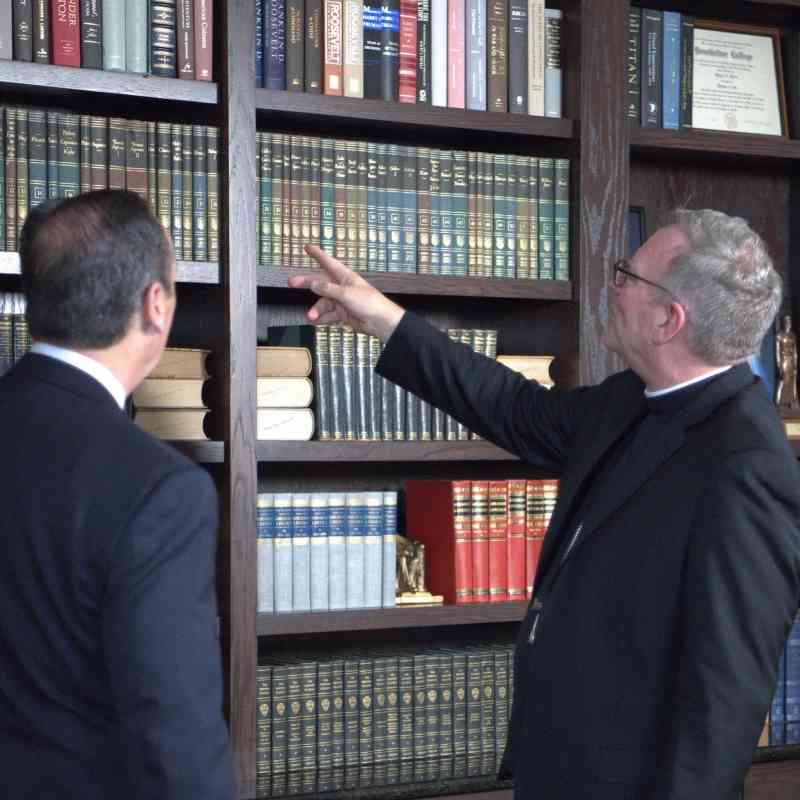 A 1970s Chicago-area high school teacher taught his students St. Thomas Aquinas’s proofs for the existence of God, and for nearly everyone in the class it was just another lesson to study for the test. But it transfixed Bob Barron. Discovering that great truth is available through philosophical reflection sent him bicycling to the local library to borrow a big tome of Aquinas’s work, from Mortimer Adler’s Great Books collection. He found exactly the book he used on the bookshelf of Benedictine College President Stephen D. Minnis (pictured).

Barron also tells the story of how he worked at a bookstore with his brother, and describes the almost random way his brother introduced him to Thomas Merton’s Seven Story Mountain. If Aquinas opened his mind, the urbane, literary, hip but deep thinker grabbed his heart.

All of this later made him a crusader against “beige” Catholicism and an apostle for all that is “beguiling” and “winsome” (to use his favorite words) in the faith.

I have often assigned to my classes Barron’s brilliant analysis of the Coen Brothers’ 2009 movie True Grit. Barron begins the video by sharing that as a child his parents loved his imitation of the star of the first version of True Grit: John Wayne.

Bishop Barron also speaks about how hearing the song “Like a Rolling Stone” grabbed his attention and started a lifelong interest in Bob Dylan.

These discoveries helped him Barron love the American culture he was going to evangelize, which is a must. They helped him speak to the culture’s interests — which were no longer novels but movies, no longer poetry but popular songs. And these performers who make the most of their talent and communicate it with others prepared Barron to do the same.

Third, Barron discovered Notre Dame Cathedral’s Rose Window — as a pilgrim and as a tour guide.

Barron told us how, as a Freshman at Notre Dame, he discovered beauty in Robert Leader’s art appreciation course. “I sat in the dark watching the slides of photographs this man had taken and I was transfixed,” he said. “He probably didn’t know that some kid in the back of this giant lecture hall was trembling with excitement” at the images he was showing.

“As I was explaining them to people and watching people’s faces I learned what really sang to them and what made sense to them,” he said.

The Rose Window, with Christ in the center and saints along its spokes, is now a major feature of Barron’s “Centered” spirituality and he takes several lessons from it:

Discovering the evangelical power of beauty also gave Barron the a way in to contemporary audiences, who won’t listen to goodness or truth but still long for beauty.

Fourth, Barron’s education prepared him for exactly what is needed in the 21st century.

Barron’s mastery of St. Thomas Aquinas means he trusts truth that comes through the evidence of the senses —while recognizing that empirical experiment is not the only path to truth. This gave him exactly the “trust science but look for more” attitude needed as a corrective today.

Barron’s Master’s thesis on Karl Marx also meant that, from the very beginning of his postgraduate life he was engaging political topics that are returning to prominence today. And his deep dive into Scripture gave him the tools to reawaken his audiences today — me included —to the powerful narrative of salvation history. Our graduating seniors were given his Word on Fire Bible, Vol. 1 by a donor. He blessed the Bibles and explained them to students (pictured) and I know at least one graduate who has made good use of her Bible so far: my daughter.

Last, the mentorship of Cardinal Francis George made him a great pastor — and an early adopter of YouTube.

It was Chicago’s smiling, no-nonsense archbishop who recognized and encouraged Bishop Barron’s talents — and then put him in charge of evangelization efforts early in the 21st century.