How can businesses help relieve poverty? By seeing that ROI, Return On Investment, does not just improve an individual bottom line. It improves lives and communities.

In the previous two posts in this series, we have identified and disclosed some of the unquestioned assumptions and imbedded beliefs in the two resource extremes on a continuum of available resources for those with wealth. We have also illuminated the struggle indigenous entrepreneurs have when surviving check-to-check or not knowing when or from where their next ride, meal, or pillow will come. Envision a Venn Diagram of separate and distinct circles with only transactional connections or arrows in between the circles (no overlapping).

There are no perfect models, but some are useful. This is a useful model to use as we consider what could be when we seek to dignify those in the condition of poverty and desire to solve some of the underlying and persistent problems that drive needs in under-resourced communities. Jacqueline Novogratz, in her book, Manifesto for a Moral Revolution, asserts that accountability (the assumed realm of business) and generosity (the assumed realm of charity) must be balanced in order to effect change. Let’s explore this further, thinking again of investment on one extreme and philanthropy on the other. Since those in the condition of poverty are often locked into a cycle of never-ending “chasing” something better, we will focus our attention on the powerful, those of us with resources, and how we can help make change happen. But to do so as previously stated, our unquestioned assumptions and imbedded beliefs must change.

What if the investor paradigm would change from its traditional market rate of returns and risk formula to something else? Here is a diagram of what a market rate capital investment model might look like: 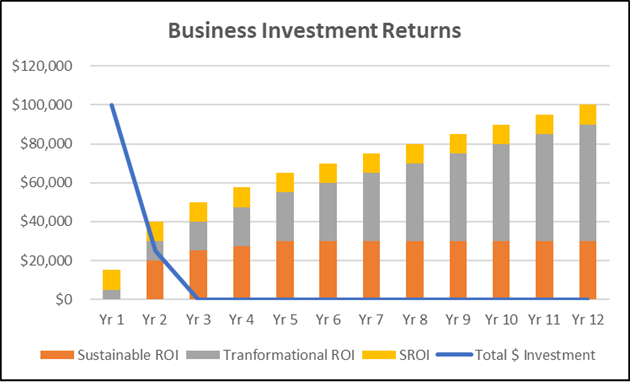 A normal business investment is loaded up front with diminished investment over time as the enterprise is expected to produce operating capital enough to fund itself and provide a market rate of return to the investors and retained capital perpetuating the enterprise itself (evidenced above by the Sustainable ROI). While a financial return is the target, normal businesses offer other returns as well.  A Transformational ROI recognizes the benefit to all stakeholders as wealth is generated through salaries, wages, payments to vendors at a profit, and so on. These returns allow others to gain while the business and investors gain. A Social ROI (SROI) represents collateral gains of society and our community in which our business operates through things like increasing property values and taxes paid to fund government services and attractions for the community. In all of this, business does good. This piece of the model represents the investment “bucket.”

Similarly, what if the philanthropic paradigm would change from its transactional giving, relief and betterment, and secular humanitarian model? Here is what the traditional philanthropic giving model looks like: 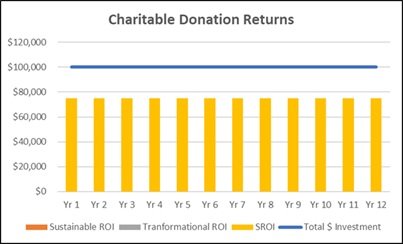 Those with resources give perpetually to worthy causes, sometimes in increasing amounts, to generate a Social ROI (SROI) benefiting more directly and less collaterally, those in our community. This is the alms giving and relief and betterment of which we speak. Notice there is no Sustainable ROI which allows the enterprise to exist in perpetuity nor any return for the giver, other a feel-good stroke. Nor is there any Transformational ROI generated that allows those employed directly by the charitable enterprise to build wealth for themselves. This could vary by organization, but most people working charitably engage in roles that are paid well below market in order to optimize the SROI. This is both courageous and admirable, but not transformational.

These are arguably the two current paradigms that govern resource distribution of those with wealth. All the while people in the condition of poverty are left to soak in their undignified position to always receive and risk being dependent on the aid offered, or to stew over the privilege perceived when investors expect the impossible – market rates of return that could not possibly be reached in their community. Humanitarian giving continues. Donors get fatigued. Core problems persist. Investments go elsewhere. And those in the condition of poverty remain locked in what feels like a never-ending chase for the stability and security deserving of every human being.

Part 4 of this series will offer a different model that promises a solution, but only if we having resources are willing to change our paradigms. Those in the condition of poverty anxiously and expectantly await a better option.

Click for Part One in this series, “Finding a Way: Entrepreneurship and Poverty”; Part Two, “Beyond the Handout”; Part Three, “Transformational ROI — Where the Bottom Line Meets Poverty”; and Part Four, “Investment not Philanthropy.”

Dave Geenens is an Associate Professor and is the Assistant Director of the Thompson Center for Integrity in Finance and Economics in the School of Business at Benedictine College in Atchison, Kansas. His over 30-years of executive experience in addition to his Bachelor’s Degree, MBA, and CPA license (inactive) add a realism to his research and teaching. Dave has written four books and speaks often on the integration of faith and work and the critical role Christian virtue plays in protecting free markets and liberty. Since Dave writes on multiple topics including investing and philanthropy, nothing in this article is to be construed as investment advice and any investment of any kind includes a risk of loss.