A small Kansas college whose new strategic plan is called Transform Culture in America will salute the popular Catholic scholar whose ideas were critical to that plan.

Bishop Robert Barron, known for his books and videos, will be the commencement speaker at Benedictine College in Atchison, Kansas, on May 14, and receive an award from the college’s Center for Beauty and Culture.

Five years ago, Barron told an audience of Atchison Benedictines the keys to transforming culture in America: Benedictine spirituality, beauty, the media, the Catholic intellectual tradition, and the sciences.

The college’s plans focus on exactly that. 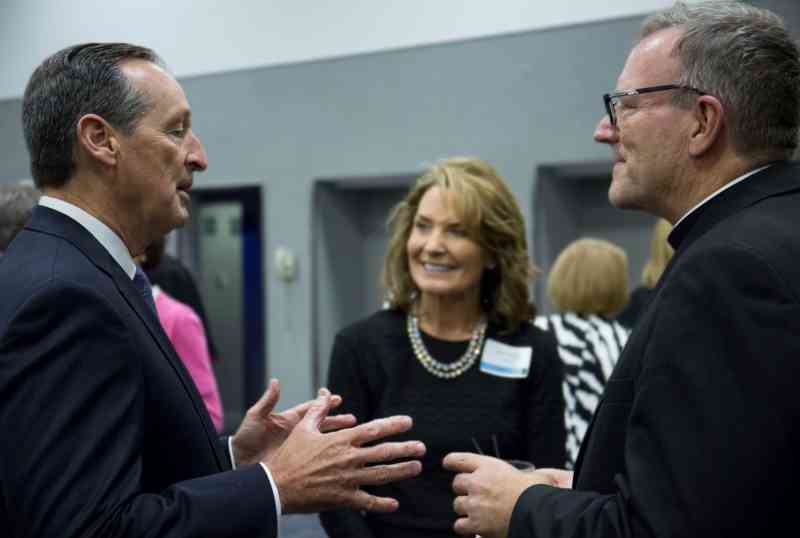 President Stephen Minnis said that Bishop Barron’s visit to St. Benedict’s Abbey on campus was providential. “In addition to Pope John Paul II, a great example for us in our new, transformative, strategic plan has been Bishop Robert Barron.”

The college took its cues for the plan from St. John Paul II, who said that through the intercession of Our Lady of Guadalupe, “The Gospel will penetrate the hearts of the men and women of America and permeate their cultures, transforming them from within.”

Barron is Auxiliary Bishop of the Archbishop of Los Angeles, but his Word on Fire ministry, founded in Chicago more than 10 years ago, is a great example of how the Gospel can reach millions of people, drawing them back to the faith.

“We’re all missionary disciples,” Bishop Barron told Benedictines five years ago. “We’ve got to get in the front lines. I mean all of us.”

“The Benedictine movement, precisely by preserving the great literature of the ancient world, re-civilized Europe,” he said. The college believes it can do the same thing today.

Benedictine spirituality has been key in his personal life, Barron said. “It was always the Benedictines that called me back,” he said. “The Benedictines kept singing to me. … Benedictine communities and houses have really touched me and shaped me.”

In addition to his duties with the Santa Barbara Pastoral Region of the Los Angeles Archdiocese, Bishop Barron is an acclaimed author, speaker, and theologian. He hosted Catholicism, an award-winning documentary series about the Catholic faith which aired on many PBS affiliates in 2011. Bishop Barron is one of the most followed Catholics on social media, with more than 3 million followers on Facebook and his YouTube videos being viewed over 50 million times.

He explained how he got started in media. “We Catholics are behind the curve when it comes to the media,” he complained to a friend once. “Well, what are you doing about it?” his friend answered.

Barron took that as a challenge and started his forays into media with a Sunday, 5:15 am WGN radio show in Chicago. “I discovered a lot of truckers listen to the radio,” he said. His media presence grew from there. To reach the culture, Benedictine College is also looking to reach off-campus audiences through the media, especially through ExCorde.org. Pictured, Bishop Barron is pictured speaking with Benedictine College’s Andrew and Sarah Swafford, known for their work in Catholic media.

Bishop Barron has made a special emphasis his outreach to the “nones” the growing number of people who claim no religion. He told his Benedictine audience, “Now what this is, everybody, or ought to be, is a major-league wake-up call.”

That means that Catholic universities have to be at the forefront of the New Evangelization, and sacred art has to be a key concern, too.

“When you start with the beautiful, it’s more winsome; it awakens less defensiveness among people,” he said. “Beauty works its way into the soul; it changes you, doesn’t it? … We evangelize through the beauty of our tradition.”

The Benedictine College Center for Beauty and Culture is one of the most important priorities of the Transforming Culture in America plan. But so is the Catholic intellectual tradition.

“Catholicism is a smart religion, and we should revel in that, not underplay it,” Barron said, through “the revival of our intellectual tradition.”

Bishop Barron received his M.A. in Philosophy from the Catholic University of America in 1982 and a Doctorate in Sacred Theology from the Institut Catholique de Paris in 1992.

Faith that is not rooted in the intellectual tradition will never sustain itself, he said. “Banners and balloons Catholicism” has been “a pastoral disaster,” he said.

“Our high school kids [are] reading Hamlet in English class, they’re doing Einstein in science, and they’re reading Virgil in Latin class, and then we often give them comic books for religion,” he said. “Why do we so underestimate what our kids are capable of? You see, then, are we surprised that they say you can’t be religious and smart?

Bishop Barron served as the Rector/President of Mundelein Seminary University of St. Mary of the Lake, in Illinois, where Benedictine College’s Denis McNamara was a colleague and theologian Andrew Swafford was a student.

A final focus for cultural change are the sciences, said Bishop Barron. Benedictine College has taken that priority to heart. The college opened five new academic buildings in its most recent strategic plan, including a new observatory and a 100,000 square-foot building that was consciously designed to be America’s finest small-college STEM building.

“Anyone in this room involved in the sciences,” Bishop Barron asked the Benedictine crowd, “can I urge all of you to get in the front lines of this fight?” 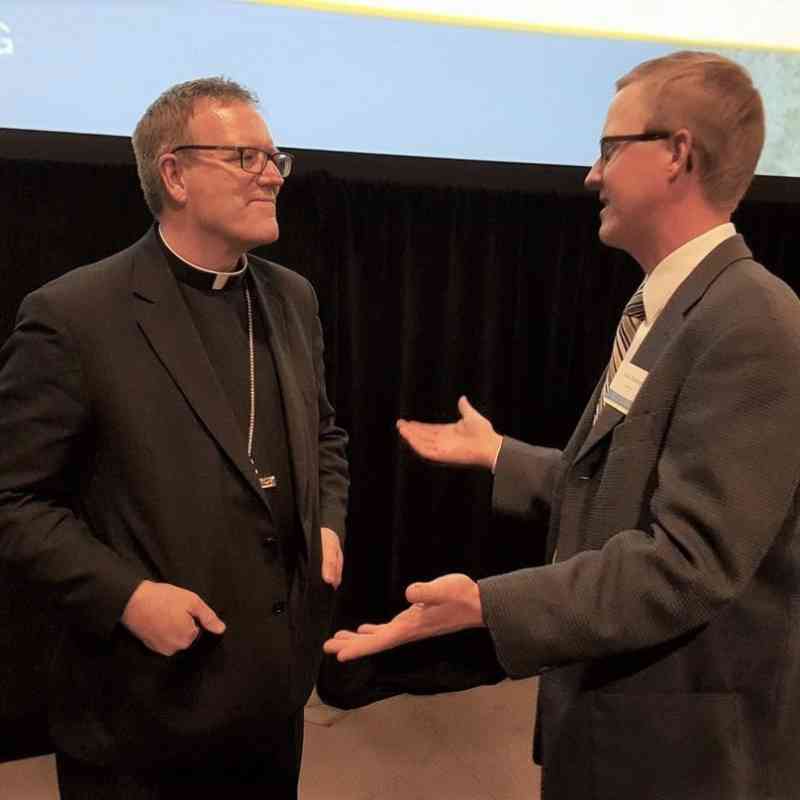 He specifically asked those who teach science to hang a poster of Georges Lemaître, the Catholic priest who discovered the Big Bang, in their classrooms. Benedictine College put a portrait of the scientist in the entryway to the new STEM building, along with other prominent Catholic scientists, and features significant scientists’ affirmations of faith on every floor of the building. Pictured with Bishop Barron here is Benedictine College theologian Matthew Ramage, whose work unites faith and science.

Bishop Barron concluded by encouraging everyone to see the Benedictine tradition “as inspiration for our own missionary discipleship.”

“We are excited to welcome Bishop Barron to our campus,” said President Minnis. “He is a great example of what Benedictine College is planning to do, using our Benedictine mission of community, faith and scholarship to transform culture in America.”